Crisis of the eighth month of newborns: what it is and what to do 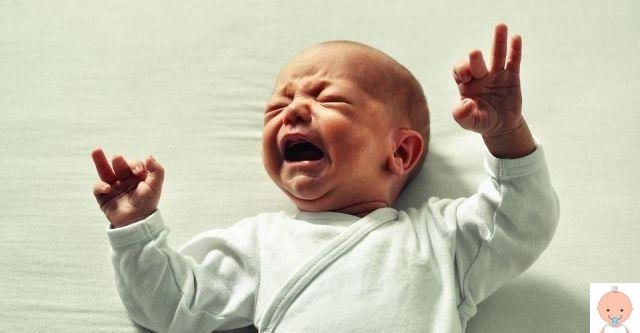 Lo scenario and this. Yours child has always been a little angel, He has always smile serene a all, eat quietly and slept as a dormouse, he always got caught up in braccio dai Parents, but also from grandmothers or give it friends tighter. Suddenly everything changes: to be with the others do not talk about it e trouble not to have the mum under an eye. It's a moment particolare known as the crisis dell 'eighth month. We see what's this and what are the errors not to commit.

Towards the 8 months of life (settimana plus, week minus), the small crosses a phase new and for him unknown, characterized byanxiety di separation dai Parents (from the mum in particular) and from fear caused by outsiders. The first is the a manifestation has been conducted of a fear ancestral and entirely natural: that of being abandoned by the person who, since birth, it's more important, Namely the mother.

At this time, the child has already acquired a certain awareness of itself, starting to perceive itself separate from her, whereas before she felt one entity with the "woman his "vita"". This passage è very important for his growth and to define his identity, but it also involves the fear (or better: the terror) that the mother goes away not to to return more.


It seems too much small because it can try this feeling? You are in error! And it is one of the reasons so they can go wild le crisis dell 'eighth month. That's why even one separation very short (like for one shower or a walk fast) can throw it nello discomfort, so much so that he can't even bear that mum you change room.

On the other hand, we must consider that a bimbo small does not yet have the perception the space (he doesn't know where the other one is room) and, above all, does not have the sense of time, so it can't to understand that the mum “Come back immediately“: For him, 5 minutes or two hours don't do it difference. Very often crisis dell 'eighth month coincides with the return of the mother al work, so the discomfort is even stronger.

Simultaneously withanxiety of detachment dai Parents can spring a strong one distrust against outsiders and, also the small which until now has been friendly e allegro with everyone, it can suddenly appear spaventato in front of people o luoghi who does not know. It could then burst a to cry, turn around on the other side, lower the eyes o cover up il face and with a manina, hugging to whoever holds it in braccio.

That do so? First of all there are some errors da avoid in case of crisis dell 'eighth month. Given that it is reactions completely normal and that indeed underline it development of yours son, it is good that i Parents do not tend to emphasize theatteggiamento of child. Not only should you not force it a socialize at all costs, but they shouldn't be used either appellatives o phrases like “but he's alone shy"Or" oh how are you scary“: These ways of doing are harmful, even with children small.

Rather than incite him not to have fear, it is better to leave it quiet e to exhibit with your example that there is nothing from to fear: seeing that welcome a friend or the plumber so friendly, you will hear reassured and slowly exceed la distrust.

La crisis dell 'eighth month It represents a tappa fundamental, necessary e unavoidable the emotional development of child, than just more tardi - around 18-24 months, he will arrive at the “representation mental of the object ": if he does not see mum e Pope next to him, consoles himinner image of them, because now it is sure that they are there, even if they are not at that moment physically present.

Cradle, here are three models to choose from ❯

add a comment of Crisis of the eighth month of newborns: what it is and what to do