Cycle in pregnancy: what are false menstruation 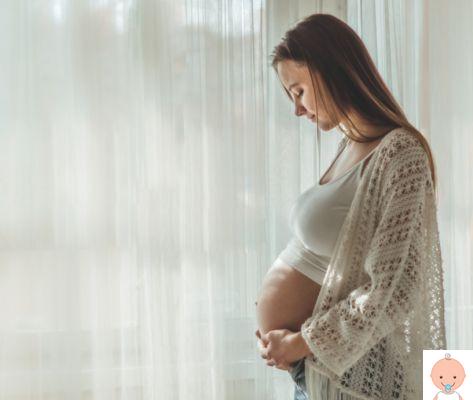 We are used to marking the months by marking the date on which menstruation occurs on the calendar. To get pregnant we know how important it is to monitor the menstrual cycle to identify the fertile and ovulation days. And now that the pregnancy test is finally positive, there are losses similar to menstruation that scare us. What is their origin and what happens to the period in pregnancy? And what are false menstruation?

Is it possible to be pregnant with your period?

The answer is No.: it is not possible to have a period during pregnancy.

Rather, you may be experimenting with one "spotting" in early pregnancy, which is usually light pink or dark brown in color. These early pregnancy losses, however, they are not at all similar to menstruation. If they are copious enough to fill a sanitary napkin then it is very likely that you are not pregnant.

To understand why it is impossible for the menstruation during pregnancy we have to take a few steps back and find out what happens in our body each month: the ovaries prepare to release a fertilizable egg. When this is ejected, it travels along the fallopian tubes and during this journey he may encounter a sperm. In this case it can be fertilized, it will continue its journey towards the uterus, where it will implant itself a few days after conception (and this nesting can give rise to a slight implantation spotting).

If, on the other hand, it is not fertilized during its journey, the egg flakes off and is expelled together with the endometrium, the innermost lining of the uterus which has the function of welcoming and nourishing the fetus during a possible pregnancy.

It is easy to confuse implantation losses with menstruation because the timing is the same: after fertilization the egg - which has become blastula - it goes to nest in the uterus and to do so it takes about 7 days: the implant ends, therefore, around the 14th day after fertilization, that is the 28th day of the menstrual cycle, when - in the absence of a pregnancy - they would return menstruation.

False menstruation in pregnancy, what are they

Le false menstruation is a loss of blood which occur in early pregnancy and which are caused by the rupture of small blood vessels in the endometrium linked to the nesting phase of the fertilized egg. In other words, these are the so-called "implantation losses" and occur about ten days after conception. It is more than real losses, a slight spotting that in many cases does not even occur.

Discharge in pregnancy can occur at different gestational times and usually have a slight color pinkish because the blood mixes with normal vaginal discharge, which becomes more abundant during pregnancy. In other cases they may be darker in color, tending to Brown, and this phenomenon is caused by the fact that the blood remained in the vaginal canal longer and the oxidation changed the color of the blood.

How long does it last during pregnancy

Le causes of bleeding during pregnancy they can be different and vary from quarter to quarter.

In the first quarter

A variable percentage between 15 and 25% of pregnant women have losses in early pregnancy. It is mostly a spotting related to the implantation in the uterus. During this period, experts are advised not to use internal absorbents, not to introduce drugs or anything else into the vagina and to refrain from sexual intercourse.

Other causes that can cause more profuse bleeding are:

In the second and third trimesters

Bleeding beyond the first trimester often requires medical attention, so regardless of whether the bleeding is light or heavy it should always be reported to your doctor. It can be caused by:

add a comment of Cycle in pregnancy: what are false menstruation