Depression in women: what happens in the couple relationship and in children 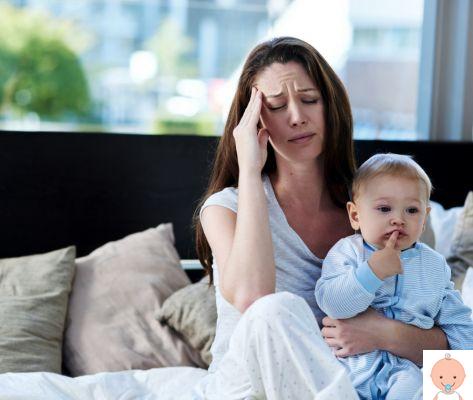 Depressed mother and effects on children

La trough it is a psychopathology that can occur in women following a pregnancy. Very often it is a pre-existing condition that tends to manifest itself at the end of the gestational period. The onset of depressive episodes may be antecedent or related to factors of familiarity with one of the parents. The female brain is also conditioned, according to some scientists, including Louann Brizendine, by hormonal factors that induce noticeable changes in her mood.

It's a mood disturbance characterized by apathy, disinterest, feeling of emptiness, ideational-verbal inhibition, motor slowdown, continuous sadness, fatigue and lack of energy or bad mood and irritability, anxiety. The pathology manifests itself for a continuous period so as to become a frequent condition and does not concern 'natural' situations such as bereavement, an unpleasant or particularly stressful event for which depressed mood is a normal consequence. The experience of depression is necessary to process some situations as it defines their detachment and allows us to overcome the event. On other occasions, however, the psychological condition becomes a real psychological status so as to persist over time.

Why does it affect women?

Louann Brizedine (2007) supports a neuroscientific thesis according to which estrogen, progesterone, testosterone, oxytocin, cortisol, vasopressin, dhea, androstenedione, allopregnenolone are hormones released during the different phases of growth. of the woman and inevitably affect her mood. The ability to establish bonds of deep friendship, the ability to resolve and calm conflicts as well as the greater verbal ability, unlike males, depends on the conformation of the brain. It is therefore obvious that the fetal phase, infancy, puberty, sexual maturity, pregnancy, breastfeeding, childcare, perimenopause, menopause and postmenopause are strongly linked to the presence or absence of these hormones.


More specifically, during pregnancy there is a sharp increase in progesterone and to the estrogen and the woman is prone to have more interest in home and family support, developing less interest in career and success. These hormones have the ability to inhibit the brain's stress circuits and to sedate the brain.

Breastfeeding it is characterized, instead, by the production of oxytocin and prolactin, two hormones that lead the woman to be more sensitive by placing her at the service of 'maternal care'. In this situation, the woman has less interest in sexuality and tends to protect the offspring. At the same time, during the growth of the children, the mother develops a greater concern for the little ones and produces a greater activity of the brain circuits of stress, anxiety and emotional bonds. It is therefore evident that a decrease in these hormones produces a considerable psychophysical decompensation.

How is the partner involved too?

One of the main symptoms of depression is anhedonia, which is the inability of the subject to feel pleasure in activities that could generally be rewarding such as sleeping, eating, relating and having the desire to engage in sexual intercourse. This determines a gradual withdrawal from activities that also involve the other, specifically the partner, excluding him from affective contacts and approaches. This leads to the indifference felt with pain by the partner who instead wants to get closer and interact. The relationship therefore undergoes a serious deflection which in the long run leads to dissatisfaction and consequently to separation.

At first the situation arouses a reaction of anger which then turns into persistent and heavy accusations in the long run unbearable. It is clear that the depressed partner will tend to defend himself by blaming the other for not understanding, but above all by communicating the lack of love towards her. That is how relationships fail as everyone considers what happened on a personal level without being able to be objective. Living with a person with mood problems, living with a person with emotional problems is not easy and sometimes you get entangled in twisted dynamics from which it is difficult to get out. Also in this case it is good to contact a competent person who can intervene and follow the couple in a constructive and decisive healing process.

What happens in the family and in the relationship with children

Depression is not a condition to be underestimated as over time it could develop into a serious disease form. It is therefore important to talk about it and intervene in time. The intergenerational transmission makes it clear that early childhood disorder can be linked to the presence of a psychopathology in the caregiver, that is, the parent who takes care of the child. Over time a depressed mood tends to affect the mother-baby relationship in a profound way. In fact, it happens that the absence of stimuli or vital energy that the mother transmits deprives the baby of affection and satisfaction of basic needs. It is now known that she not only needs to nourish herself but also to feel the contact that allows her to support her psychological development through attentions, affective exchanges, eloquence, cuddles and hugs.

If the child does not receive all this, he too will feel absences and shortcomings on the emotional and relational level. It often happens that he stops smiling, satisfying his own needs by putting others' in the foreground and creating what Winnicott considers. the 'false self', that is, something that does not correspond to the real way of being of the individual but that he uses himself to relate to others. His life reflects a sense of subjective uselessness, an emptiness, of non-existence. Some studies (Archives of General Psychiatry) have also reported that maternal depression can involve the presence of behavioral and antisocial disorders in the child. If the mother does not have the strength to get out of bed, she if she has a depressive disorder after childbirth and in the following years it is clear that the child's childhood is neglected. In turn, the child will manifest his discomfort with depression or by engaging in disturbed behaviors as an expression of her inner discomfort.

A child with a depressed mother has more difficulty in relating than others, is more sensitive, introverted, shy, laughs little or not at all and is unlikely to play and be involved in the performance of the group-class. His being in the world is being 'tiring', with lacking emotions and difficult to experience, with the absence of mimicry and facial expressions, distant from the real world and lost in his own. Pharmacotherapy, often useful in these cases, can help and support a psychotherapeutic intervention aimed at both the mother and the child himself.

The diet for a woman with gestational diabetes ❯

add a comment of Depression in women: what happens in the couple relationship and in children