Detachment of the placenta: causes, risks and remedies 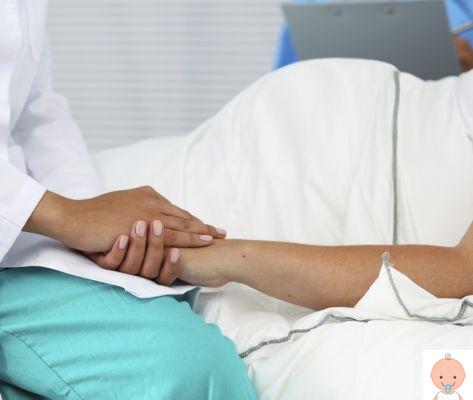 Detachment of the placenta

During pregnancy, an event known as "placental abruption". What is it about? Is it so dangerous for mom and unborn child? Can we do something to prevent this?

Sometimes during pregnancy it may happen that when performing an obstetric ultrasound, the specialist notices a "placental abruption ", which could put you expectant mother on the alert and apprehensive.


What exactly does it mean? What happen? That the placenta has practically detached itself in whole or in part from its normal implantation site, ie from the uterus, before the baby is born. Detachment can occur before labor begins (premature detachment) or in any case in the process of labor (early posting). A detachment that can occur at any time during pregnancy, whether in the first trimester or even in the following months; in all cases important attention is required.

What could happen so bad if the placenta becomes detached? By separating part of the placental tissue, a kind of "wound”On the uterus which then begins to bleed.

Read also: Abnormalities of the placenta

If it is possible, already during the first meeting in pregnancy, it is important that the obstetrician / gynecologist list the different and probable factors that may in some way involve a risk for a placental abruption. Some of these are purely mother:


Others, all those causes of increased uterus volume such as in the case of twin pregnancy or polyhydramnios (excess amniotic fluid). But also a pregnancy with PROM (premature rupture of the amnicorial membranes) or preterm birth, could lead to a placental abruption. Type risk factors mechanical I'm:

Therefore, it is absolutely essential that you future mother know everything that could possibly contribute to the separation, in order to then be able to act accordingly.

What are the delivery times? symptoms that should make you suspect that there is / has been a detachment? In the case of placental abruption, the symptoms are not always clear and specific. It is quite variable, depending on the location of the clot and the amount of blood lost. In fact, by correlating the two things, a mild, moderate and severe clinical picture can be distinguished.

Generally speaking, the symptoms you may experience and / or complain of are:

Should you come to our attention with suspected posting what confirms that you are in danger? You can undergo laboratory tests to assess the coagulation pattern, even if these are not specific to make a definitive diagnosis.

On the other hand, it turns out to be quite useful and essential clinical evaluation. That is, the midwife or the specialist doctor who took care of you, like in the emergency room, goes to evaluate the blood loss, their color and also the entity. It then performs avaginal exploration to also understand where the blood comes from, whether from the inside of the cervix or from the outside.

If you complained abdominal pain, also performs a palpation to understand if there is actually pain and in what specific area. A trace is then carried out to evaluate the well-being of the fetus (confirmation of the heartbeat of the unborn child) and therefore ascertain or exclude suffering, as well as record any uterine contractions, if any, and the type.

Consequences of placental abruption for mother and fetus

What does bleeding involve in pregnancy? What are the effects on both you and your baby?

As later complications you can have: coagulopathies that is defects / coagulation disorders, renal failure and damage to the uterus with loss of contractility (in this case it may be necessary to remove the uterus to save your life).

How to intervene: treatment and clinical management

If the detachment of the placenta occurred in the very first weeks of gestation, after having ultrasonographically ascertained the presence, in addition to the embryo, also of theheart activity, you will be recommended absolute rest, no work activity, sexual abstention, taking a drug such as progesterone by vaginal, oral or intramuscular route (it acts as a muscle relaxant and therefore to reduce / block any uterine contractions, but also to make the environment uterine / endometrial most suitable for implantation).

However, if it has been ascertained that there is a placental abruption ma there is no fetal viability (heart is missing or does not beat), you are in the presence of a miscarriage. Then, you will be informed about what to do: either await the expulsion of all the chorionic / placental material or perform a "surgical cleaning" of the uterine cavity (curettage or revision).

If the posting occurs during the second / third trimester of pregnancy your management varies according to your clinical status. Blood losses must always and in any case be reported to your gynecologist / obstetrician who you have chosen to be assisted. Or go to the nearest emergency room promptly as the detachment is an absolute obstetric emergency. However, if you are in good condition, the fetus is fine, labor has not started and the bleeding has stopped, conservative treatment is justifiable.

You will be monitored constantly (even your baby); they will eventually give you drugs to block uterine contractions (tocolytic drugs such as "Tractocile") and drugs such as cortisone ("Bentelan") to induce lung maturity in the unborn child, since we are at an early age and your baby's lungs are not yet completely developed.

In the event that the bleeding is abundant, such as to compromise your health, as well as that of the baby, an emergency cesarean section will be performed. A vaginal birth can only be attempted if you are stable, if one is foreseeable rapid labor, if the fetus is constantly monitored and with an operating room immediately available or if the fetus is already dead.

Is it possible to prevent placental abruption?

One often wonders if the placental abruption can be prevented. In reality, not much can be done because it remains an unpredictable event. However, it may be useful to consider the various factors considered a risk of detachment. This is why it is important that during the first obstetric visit, the midwife or specialist doctor questions you, performs what is called and defined "anamnesi", So as to be able to ascertain or exclude particular conditions that could cause you to be alarmed.

You will surely be advised to adopt a healthy lifestyle both before and throughout pregnancy. So don't smoke, don't use drugs, eat healthy foods that don't raise blood pressure. This could help prevent detachment.

In the case of a placental abruption in a previous pregnancy, the specialist will evaluate with you the risks for the current pregnancy, as there is a high risk that the disorder may recur. If it is a twin pregnancy, this must be followed very carefully, with frequent and targeted checks.

The fact remains that it remains an absolutely unpredictable event, even in the absence of risk factors. The detachment may occur even if you are a healthy pregnant woman.

For this we recommend you, as soon as you notice blood loss, especially if abundant, to immediately call your gynecologist or go immediately to the obstetric emergency room, to be followed and assisted as quickly as possible.

Disorders of pregnancy: here are the home remedies ❯

add a comment of Detachment of the placenta: causes, risks and remedies