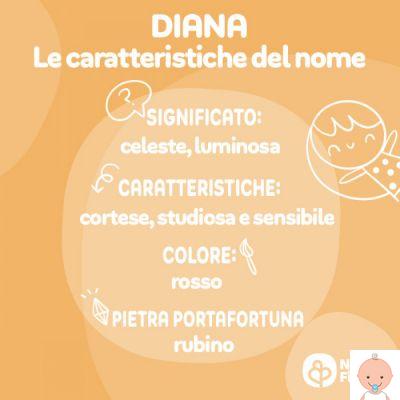 Diana is a feminine name that holds its popularity steadily over the decades and has been carried by many noblewomen and even some rulers. In this guide we discover the origin, characteristics and spread of Diana name for baby girl.

What is the origin of the name Diana?

Diana is a name of ancient classical tradition and can find its origin in the proto-Indo-European root dyeu or dyeus and in its most ancient form we find it as Diviana. According to some sources it can also be a hypocoristic of other names such as Veridiana or Frediana.

What is the meaning of the name Diana?

The term dyeu or dyeus it meant "shine" but also "sky". So in a broad sense the meaning of the name Diana is "that brings the day"," who has the light ".

What is the spread of the name Diana?

Diana began to be used as a proper name in ancient the city thanks above all to the Goddess Diana and precisely because of this origin it was considered a pagan name and therefore did not find great diffusion in Christian circles. After having fallen into disuse a little in the following centuries, it came back into vogue in Renaissance and then experienced a moment of great popularity starting in the nineteenth century in both England and France.

Lately the diffusion of the name Diana has been growing: according to i ISTAT data relative to the most common names, in 1999 172 girls were called Diana and in 2022 the absolute value was 755.

When is Diana's name day?

The name day is celebrated on 10nd June when Blessed Diana degli Andalò, Dominican nun and founder, is remembered.

La give Diana was, in the Ancient the city, the lady of the woods, protector of wild animals, keeper of springs and streams, protector of women, to whom she ensured painless births. Goddess Artemis, of the hunting, the Moon and the woods.
The mythological legend tells that Diana, twin of Apollo was a virgin skilled in hunting, vindictive and short-tempered, she loved wandering in the woods in solitude. She had taken a vow of chastity and in iconography she is often represented with a bow and arrows.

The variant "Daiana", and it is an adaptation based on the English pronunciation of the name Diana.

How is Diana's character?

The main features of the Diana's personality they are impulsiveness, spontaneity and sometimes whim. Diana has a jovial and enthusiastic nature but her mood swings make her quite unpredictable.

She is a bit temperamental, but she is always forgiven thanks to hers charm and his willpower. She has a strong spontaneous side, sometimes naive, she is mischievous and always manages to achieve her goals. Diana has a strong character, she is stubborn and knows how to get respected and she always needs to be surrounded by people who appreciate her.

Diana believes in friendship, she does not like being alone and is very good at building and consolidating social relationships, she fascinates others with her good humor and her beautiful character.

E' romantic, sensitive, impulsive but very loyal and at the same time loves adventure and a little frivolous.

What profession will Diana make? He has a passion for all forms of art and for culture. He can therefore combine business with pleasure, finding gratification in professions in the arts, crafts and culture.

What zodiac sign is associated with the name Diana?

The zodiac sign that best reflects Diana's personality is that of Gemini: nice, they love to be in company and charming for their jovial character.

What is Diana's precious stone?

Diana's precious stone is the ruby, the gem of fiery passion that brings joy and fosters understanding.

What color is associated with Diana?

Diana's color is red, the color of feelings par excellence: love, passion, hate and anger. It is a color that gives energy and motivation and is associated with courage and ardor.

What is Diana's lucky number?

Diana's lucky number is 3, a symbol of creativity and great energy.

What song should you dedicate to Diana?

We chose the song Diana by One Direction, on the Midnight Memories album of 2022.

Diary of a pregnancy: how tired the second month ❯

add a comment of Diana name for girl: meaning, origin and curiosity