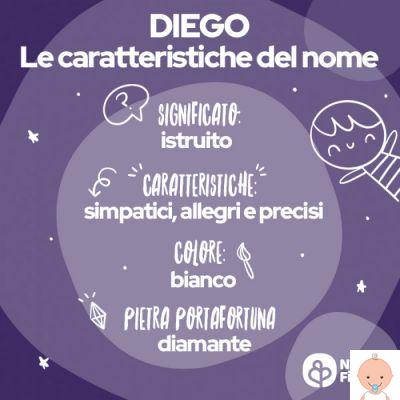 Diego is a male name of dubious meaning that has Spanish origins and is also widely used in the country. Especially at the turn of the eighties and nineties, in honor of the footballer Diego Armando Maradona, an explosion of children was recorded in the south of the country who were called Diego. Let's find out in this guide the meaning and origin of name Diego to un child.

Many saints and blessed were called Diego. The name day is generally celebrated on the following dates:

Origins and etymology of the name Diego

The interpretation and origin of the name Diego, certainly Spanish, is not very easy. It can lend itself to different interpretations:

Meaning of the name Diego

The meaning of the name, based on the different etymological interpretations, can therefore be:

Video: Diego, origins and meaning of the name

Diffusion of the name Diego

Widespread in Spain, in our country the name Diego became popular especially in the South in the Bourbon era and then, as we said, had a boom in the last Eighties thanks to the fame of Diego Armando Maradona. However recently, after a relative decline of popularity, the name is back in vogue: according to the data ISTAT in 1999 1052 children were called Diego, while in 2022 this name was chosen by 3.008 new parents and the villagers.

Personality of a child named Diego

Diego has a standout intelligence and is distinguished above all by its great communication skills, charm and the safety that transmits. He is confident, optimistic and persevering. He prefers to trust his own instincts rather than others, he is stubborn and determined: Diego stops at nothing and loves challenges. AND' perfectionist, loves to excel in every activity he undertakes, is concrete and rational, but also extroverted and capable of profoundly enriching his interpersonal relationships, both from an intellectual and professional point of view.

Diego is charismatic and endowed with great charm. His elegance and kindness make him extremely attractive even towards women. He is reputed to be a Casanova, because he senses women's needs and is romantic and charming.

What profession will Diego do? All professions in the fields of marketing, commerce, business and finance are perfect for him.

The zodiac sign that characterizes Diego is him Scorpio: narcissistic, seductive, tenacious.

The color associated with Diego's personality is red which recalls the idea of ​​the heart, blood, passion in everything he does. Red is a bright color linked to energy, enthusiasm, dynamism and perseverance.

Diego's precious stone is the topaz, a symbol of originality, it helps to acquire the wisdom and nobility of the soul. This gem has great power on the emotional aspect, relieves tension and creates an atmosphere conducive to reconciliation.

Diego's lucky number is 9, a symbol of people capable of everything, but also of concreteness and great intuition.

add a comment of Diego, name for child. Origins, meaning and curiosities