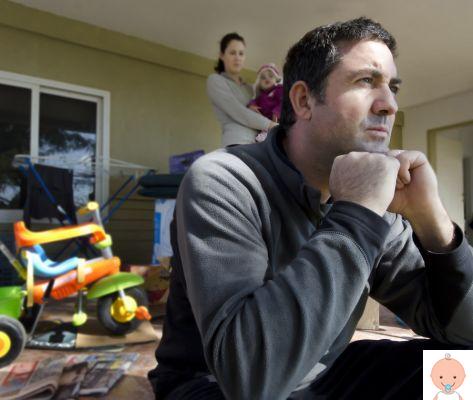 Live a pregnancy always has something magical, but being a fairly long period, a series of changes take place that do not take long to manifest themselves on the emotional level. For the couple, waiting is a period of inner growth, that is, experiences linked to their condition as a child, parent and partner re-emerge.


Man is not excluded from depression and he too experiences a series of psychic upheavals that induce him to relate differently within his role. Several studies have shown the emotional involvement of the father even during gestation which takes its cue from the famous couvade syndrome.

Read also: How to deal with postpartum depression

Also the baby blues defined as a series of mood-related disorders such as sense of inadequacy, anguish, sadness, often accompanied by fits of crying, anxiety, sense of lack of appetite, and which involve new mothers during the first period following childbirth and in about 70% of cases, affect new fathers in the same way.


Current research (Université de McGill, 2022) demonstrates just this: in 622 Québec fathers followed over a year and a half and who were given a series of questionnaires aimed at measuring various factors including depressed mood, physical activity, sleep quality, social support, marital satisfaction, financial stress, and socio-demographic factors in the partner's third trimester of pregnancy found that 13,3% of men have a high rate of depressive symptoms. The manifestation of the same seems strongly linked to sleep deprivation. Furthermore, the presence of mood alterations before delivery is predictive of the existence of the same disorders soon after birth.

The relevant aspect is underlined by the type of bond that is created between the partners but above all by the strong stress to which both are subjected. The identification with the experience of the other allows both subjects to experience similar emotional situations.

What can be done?

First of all, check if the symptoms are persistent and in any case already present in the gestation period, after which it is possible to contact experts for get support which basically aims to acquire more in-depth knowledge about parenting and paternity. Indeed, the male role within the couple during gestation and motherhood is fundamental. In the period preceding birth the man has the function of containment: the anxieties, worries and maternal anxieties both before and after the birth are limited thanks to the continuous reassurance, attention and care that the father places towards the partner .

It is therefore important for him to be able to maintain a suitable and healthy psychic condition in order to protect himself and the new family.

add a comment of Do dads also suffer from baby blues?