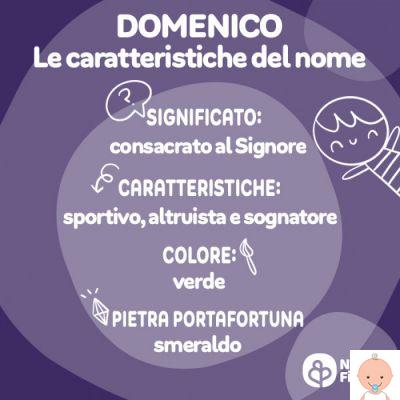 Domenico is a very traditional male name, more common in some regions of the country than others, and is often a name that is handed down from generation to generation. We discover in this guide the origin, the meaning, the curiosities about Domenico name for child

Origin and etymology of the name Domenico

The name Domenico originates from the late Latin dominicus, an adjective which meant "of the master".

Meaning of the name Domenico

If originally the name referred to the owner in the strict sense, at the time Christian its meaning became "of the Lord" and until the fourth century it was used with the precise meaning of "consecrated to the Lord ". Later then it was intended for children who they were born on Sunday, therefore on the day he was consecrated to God.

Diffusion of the name Domenico

In the twentieth century the name Domenico was the 13th most widespread name in the country and is particularly popular in Catholic circles and families, with particular diffusion especially in the southern regions.

The Lombard variant Domenegh was then shortened to Menegh, from which the diminutive derives Meneghin, that is, the name of the popular Milanese mask, and over time the Milanese adjective has come to indicate anything related to the city of the city.

Today its popularity is certainly declining: according to i ISTAT data relating to the most common names in the country, in 1999 Domenico was called 1640 babies, while in 2022 there were 946.

When is Domenico's name day?

Numerous saints and blessed bore this name, but in most cases the name day is celebrated onAugust 8th, in memory of St. Dominic of Guzmán, founder of the Order of Preachers.

Who was Saint Dominic?

Spanish Dominic of Guzmán, founder of the Order of Preaching Friars, he was proclaimed a saint in 1234. According to the story of Blessed Alano della Rupe, in 1212 Dominic had a vision of the Virgin Mary and the delivery of the rosary beads. Since then the rosary has become the most popular prayer to combat heresies and also one of the most traditional Catholic prayers.

Domenico is a man nice, selfless, full of charm. He has no difficulty in taking responsibility for him and is a reliable man as well generous. It has a reassuring, welcoming, protective: it is the shoulder on which friends can lean to confide in one another or oak for help and listening.

Domenico is elegant, refined, a true esthete. He is in love with harmony and beauty. He does not tolerate discord and resentment. He is very diplomatic, sociable, full of kindness and tact.

He is not a conformist, he always has an approach original to things and to life. He has a deep sense of justice that often angers him in the face of iniquity. He is proud, perfectionist, but also loving and very active and full of energy and has great strength and motivation.

What profession will Domenico make? You can be satisfied with working in the medical field, but also in the legal or artistic world.

What zodiac sign is associated with the name Dominic?

Dominic's personality is similar to that of those born under the sign of Capricorn: stubborn, full of energy, responsible and patient.

What is Domenico's precious stone?

Lo Emerald it is Domenico's lucky stone, it gives harmony and vitality.

What is Domenico's lucky number?

Which color is associated with Domenico?

Domenico's color is green, the color of nature, of hope, of renewing life and of continuous energy.

What a song to dedicate to Domenico

They could not fail to draw on the great's repertoire Domenico Modugno, with her "In the painted blue of Blu"

Women who do not want to have children: childfree ❯