We could define it ... the donkey's revenge, an animal that has always been a bit derided and mistreated. Its milk is the most similar food to mother's milk and, for this reason, very suitable for feeding younger children. Donkey milk is a product of a thousand qualities, even if it is not very well known: it still remains a bit of a "niche" and even its cost is not exactly within everyone's reach. However, it has been shown to do very well in particular to preterm babies, but also to all those who are not premature, but have a problem of allergy or intolerance to milk proteins. Let's find out more about its characteristics and merits.

The properties of donkey milk

It is a very valid food alternative because its composition is extremely similar to that of breast milk. It is therefore more easily digested and provides a good dose of energy. Even older children can take it, perhaps at breakfast, to guarantee a reserve of calories, useful for facing the day with a sprint.

Compared to cow's milk, donkey's milk is less fat (which is why it is digested better). In addition, it is rich in vitamins A and D, lysozyme and lactoferrin. The latter are proteins with high biological activity that reach the intestine intact, feeding the "good" bacteria that colonize the intestinal environment and guarantee the organism's well-being. Donkey milk therefore has probiotic properties.

Its taste is rather sweet, a characteristic that makes it also appreciated by newborns. This is due to the high percentage of lactose, which favors the absorption of calcium, which is very important for the bones. The casein content, on the other hand, is lower than that of the vaccine: less than 40% compared to 80. Caseins are among the proteins that most often cause allergies or intolerances to milk. This explains why this milk is better tolerated by babies.

Given its properties, donkey milk can easily be taken by older children, teenagers and adults. It is also used for some cosmetic products and is very useful in old age because it helps prevent or fight osteoporosis.

Donkey milk: how to buy it

There are different formulations: you can buy fresh, possibly of biological origin, or pasteurized and freeze-dried. In practice it is a powder that dissolves in water when needed. A beauty tip, mothers: freeze-dried donkey milk used on the skin as a scrub makes it smooth and soft. A real home beauty treatment.

In Italy, every year, over 30.000 children are in too much of a hurry to be born and do so well in advance. Of these, about 5.000 weigh less than one and a half kilograms. The management of these crunches is very delicate and nutrition also plays a fundamental role. Breast milk is the best food, but often due to the particular nutritional needs of premature babies it must be fortified with nutrients, especially cow's milk proteins, which are not always well tolerated by the tummy of these babies. And this is where donkey milk comes in. 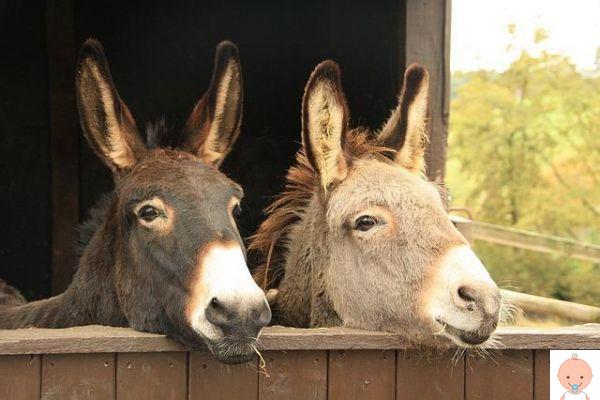 A recent study showed that this product halves the symptoms of food intolerance in preterm births. The research, which involved 156 children, was conducted by researchers from the Institute of Science of Food Production of the Cnr of Turin (Cnr-Ispa) and by the university neonatal intensive care team of the Sant'Anna hospital of the Città della Salute. of Turin with the support of the Compagnia di San Paolo of Turin. It was published in the Journal of Pediatric Gastroenterology and Nutrition.

“Recent studies - says Laura Cavallarin, CNR-Ispa researcher - had already shown that donkey milk is the closest mammalian composition to human milk. Hence the idea of ​​trying it as a breast milk supplement. The first phase of the project involved the design and production of the experimental fortifier. Two concentrates of donkey milk were obtained, with the same protein and caloric content as the corresponding commercially available cow's milk products, respecting the current legislation on baby food and guaranteeing their microbiological safety. The donkey's milk was collected from two Piedmontese farms and one from Reggio Emilia ”.

The results of the donkey milk study

The investigation lasted 24 months. “The study involved 156 premature births of very low birth weight and age (less than 1.500 grams and maximum 30 weeks of pregnancy) - says Enrico Bertino, director of the Neonatal Intensive Care at the University of Turin -. Half of the children received human milk for 21 days with the donkey milk-based fortifier, the others the standard cow-based fortifier. Since the products are different, the two diets have been modulated to have the same nutritional intake. The clinical study showed that episodes of food intolerance were 2,5 times lower in subjects taking the donkey milk product. In particular, the episodes of vomiting and biliary stagnation in the stomach were reduced, indicating intestinal malfunction ".

"An important result both for the early achievement of a complete oral feeding, a key objective in the assistance of premature babies in neonatal intensive care for their faster return home, and because, in these phases, it affects the state of health in 'adolescence and adulthood ”, concludes the doctor.

How much does donkey milk cost and where to find it

As we mentioned at the beginning, this product is still quite expensive: there are not very many farms and it is therefore easy to understand that this milk is particularly “precious”.

On average (but obviously with some differences):

You can buy it in large supermarkets, in shops specializing in organic or baby products, on the Internet, in pharmacies.

Like any other product, donkey milk - albeit full of virtues - is contraindicated in some cases. It should not be assumed by those who:

If in doubt, ask your pediatrician or family doctor for advice: they are the best for advice of this kind.

Cow's milk no earlier than one year of age: here's why ❯

add a comment of Donkey milk, perfect for premature babies and more