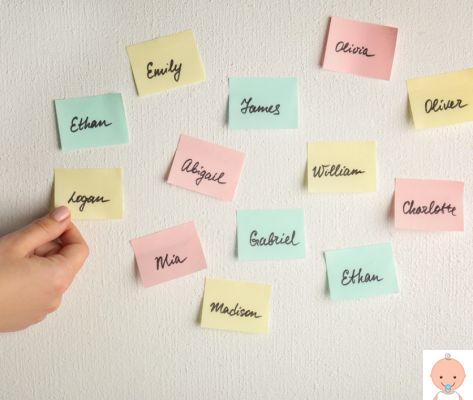 You are about to have a child and, in addition to choosing the name, you have another doubt: what is the difference between double name and middle name? Maybe you want to put a middle name but you don't know what to do legally or what this will mean for you son. So let's see together how it works.

The choice of name

Most Parents he chooses only one name: some know it even before conceive, others decide it themselveswing childbirth, but you don't always agree, right? For this reason it may happen that in the end it is decided for more than one name, perhaps to please mom and dad, or to remember one loved one, as a nonno, or to give a meaningful name that comes after the main one, like Vittoria, for example.

double name we can therefore understand the presence of a compound noun, as in the case of Annachiara, Mariarosaria, Annamaria and others. It is in fact very common for female names that contain Anna or Maria within them, while for male names it is easier to find compound names that are actually considered a single name, with Gianfranco or Pierluigi. The double name, however, it can also mean the presence of two separate names but that always go together: instead of Annachiara, Anna Chiara. What changes? On a personal level little, on a legal level it just depends on how you will register the name at the time of birth.

Il second name, on the other hand, it is not an "official" name. For example, if you want to call your son Alessandro Vincenzo in memory of nonno Vincenzo now gone, but you don't want to force him to sign all your life with the two names, just choose Vincenzo as the middle name.

Read also: The choice of the name entrusted to the internet

Double and middle name in practice

So how does it work in practice? It all depends on what you want to do: the second name it's just "symbolic" and you don't want it to appear in papers, or you want your child, for life, to have both names? When report the birth of your child to the civil status officer you must indicate the choice:

That of comma it is a novelty introduced in 2022 precisely to give the possibility, to those who wish it, to give a second or third name to the child without this having consequences then on papers and on the obligation, for life, to sign two or three names, even long ones. In this way, that is, with the comma separating the names, only the first will appear in the official documents but any relatives who hoped for the tribute will be satisfied!

What to do if you are unsure of the middle name

be you son is already an older one, or if the question of second o double name concerns you, you can request a abstract of the birth certificate and check exactly if there are middle names. Remember that it is important to always use the full name, as registered, to avoid problems: if your child introduces himself as Andrea, but his name is Andrea Guido, it could have consequences with the tax authorities, with the bank and in other areas.

La difference between double name and middle name is simple: in the first case it is a full name which takes into account all the names in any official act and document, in the second instead it is only the first name to count, but the person will not be forced to use the others as well, which will never appear.

Sleeping pregnant, what a problem! ❯