Ectopic pregnancy, symptoms, causes and how to behave 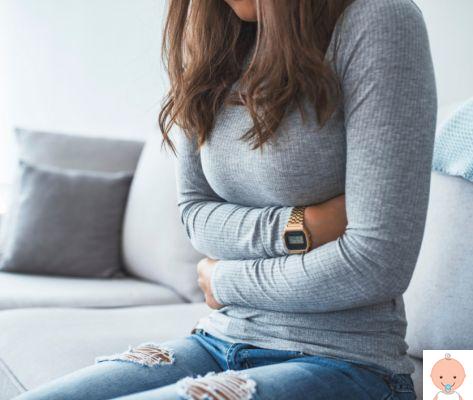 La ectopic pregnancy o ectopic pregnancy it is a particular form of pregnancy that is implanted in a different location than the usual one, that is outside the uterus. Normally after an egg is fertilized it travels along the tubes and anchors itself to the inner wall of the uterus, where it will then grow and form the baby. Sometimes this does not happen, let's try to understand why, how to notice it and what are the consequences.


If we consider the ectopic pregnancy we must understand where this egg is most likely to implant itself when it does not enter the uterus. Surely 80% of cases have a pregnancy positioned in the fallopian tubes, followed by the abdomen (outside the pelvis), ovary and cervix. Today we are mainly concerned with tubal pregnancy which is the most common and also the most dangerous form.

First of all, we can say that it is not such a rare event and the latest epidemiological data have shown (in the USA) an increasing trend. Still statistically speaking (attention, statistics detect probabilities, not absolute certainty), it appears to be more common in women who have already had children rather than in women with their first child.

What are the main causes of ectopic pregnancy?

There are many causes or factors that facilitate the nesting of the fertilized egg in the tube or in a location outside the uterus, I will try to briefly illustrate the most common. Let's say that we can divide the causes into two large groups: the first concerns all the causes that prevent the embryo from moving towards the uterus; and the second group are all the factors that facilitate implantation outside the uterus.


The following causes belong to the first group:

The second group of causes, those concerning the factors that facilitate nesting in the fallopian tubes, mainly belongs to a condition that is unfortunately also very common and has been growing in recent years.

Are there any symptoms of ectopic pregnancy and what are they?

Unfortunately, there are both cases, that is, there are women who have symptoms and women who have none at all. And unfortunately, even the symptoms that appear in an early ectopic pregnancy are often underestimated because they are very similar to those of a physiological pregnancy. Then they present nausea, mild abdominal pain reported to the specialist with these words “as if I always had a weight in the area of ​​the ovaries or lower abdomen”. Subsequently, when the pregnancy is advancing, the typical signs of a spontaneous abortion may appear, therefore blood loss, even continuous with the expulsion of filamentous material or small lumps. The pain increases and becomes renal or intestinal colic. In these cases it is necessary, regardless of the ectopic pregnancy, to go to the emergency room immediately.

What happens to the pregnancy test?

Since a pregnancy is actually in progress, the test will be positive as if the implant had taken place directly in the uterus. In particular, we can observe beta-hcg values ​​in the blood that are slightly below normal: at 6 weeks a value that exceeds 2000mU / ml, but which is less than 15600 mU / ml. We can also note that this value does not have the normal growth pattern that is instead found in a normal uterine pregnancy. In fact, it does not double in 48-72 hours, it grows but more slowly. This so anomalous growth of the beta-hcg value it must give us the suspicion that something is wrong and therefore leads us to investigate the situation with further instrumental examinations.

As we said earlier, if the beta-hcg dosage is suspicious, the gynecologist will prescribe in-depth examinations and ultrasound is one of them. A transvaginal probe is normally used to perform this type of ultrasound. The reason is that it is able to get closer to the affected organs without being hindered by the bladder and possibly the intestine. This is what happens in an ultrasound where an ectopic pregnancy is suspected. The first step in pregnancy is to look for the uterus and its modifications. At 6 weeks (so about 2 weeks after the lack of menstruation) it is already possible to see the gestational chamber as a dark spot in the center of the uterus. In ectopic pregnancy, this stain does not exist. The uterus is empty, the same shape it has in a non-pregnant woman. At this point with the ultrasound probe you go to look for the ovaries and tubes, the first which should be clearly visible as rounded masses; the latter are not very visible because the walls are placed side by side. And instead we find: the visible ovary, but the tubes very dilated, with a gestational chamber inside and sometimes a mass similar to that of the ovary inside (the embryo). In some cases it is also possible to see free liquid in the space between the rectum uterus. At this point the diagnosis is practically made. However, I would like to underline that neither ultrasound without the beta-hcg dosage, nor vice versa beta-hcg without ultrasound can make a certain diagnosis.

Once the diagnosis is made, what happens? How do you proceed?

The management, the management of an ectopic pregnancy is quite complicated. More than anything else in deciding how to resolve the situation, which approach to use. It really depends on the structure you are addressing. Surely what is essential is to go to a hospital because this type of pregnancy cannot continue, under penalty of the mother's life risk. Then the gynecologist who will have made the diagnosis will direct you to an appropriate facility. At this point we can find three types of different approaches to the treatment of ectopic pregnancy.

The first check in pregnancy, the one that is normally carried out after detecting the positive test, is able to immediately direct the path to follow. Therefore, it is sufficient to carry out normal periodic checks to practically reduce to zero the risks of incurring the most serious outcomes of ectopic pregnancy.

What are the symptoms of an ectopic pregnancy?

In the beginning, ectopic pregnancy does not manifest major symptoms, other than those typical of any pregnancy. After a few days, slight vaginal bleeding may occur; pelvic pain; some women also have shoulder pain; urge to evacuate.

What are the causes of an ectopic pregnancy?

There are several factors that can increase the risk of ecotpic pregnancy: the fertilized egg does not get to nestle in the uterus, but in a different area, often in a fallopian tube. In many cases this circumstance is caused by inflammation or damage of the tube or by hormonal imbalances. Genetic factors, intrauterine contraceptive devices, tubal surgery can also contribute to the risk.

In a normal pregnancy, the Beta Hcg level doubles every 48-72 hours; on the other hand, in ectopic pregnancies, the levels of Beta Hcg usually increase less markedly. So the Beta levels are lower than expected.

What to do in case of ectopic pregnancy?

An ectopic pregnancy cannot go on. In most cases it resolves with a spontaneous abortion, while in the other cases it is necessary to proceed with a pharmacological or surgical termination of pregnancy.

What are the consequences of an ectopic pregnancy?

If not treated immediately, ectopic pregnancy can be life-threatening for a woman. After implantation, the egg produces enzymes that erode the wall and can cause a tube to rupture with consequent bleeding.

Pregnancy: exercises for back pain ❯

add a comment of Ectopic pregnancy, symptoms, causes and how to behave