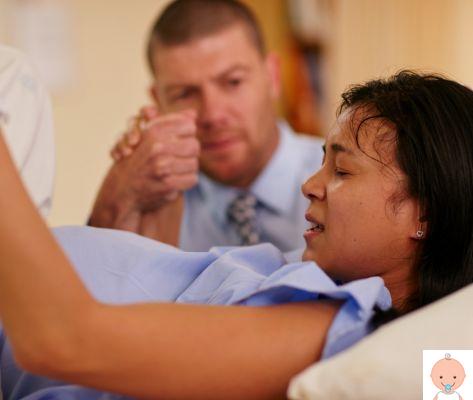 During the pregnancy one of the most important choices to think about and whether we want to or not epidural anesthesia during labor. Today I would just like to focus on explaining what it is, what are the differences between the various techniques and what possible risks and side effects.

First of all we start from the different definition between analgesia ed anesthesia. From the dictionary of el paeseno the term analgesia means: “reduction or cancellation of pain sensitivity, while maintaining the alert state”. Anesthesia, on the other hand, means: “Loss of sensitivity obtained with the use of drugs”. Although the two definitions may seem very similar, their difference revolves around the concept of sensitivity. That is, in the first case the painful sensation is canceled, but you are still able to perceive the part of your body and what happens in it. In the second case, on the other hand, you know that you have that part of the body, but no painful or other information comes from there (for example sensory, tactile, etc.).

Lowering this discourse in the specific of labor and delivery we can say that they belong to the class of analgesia all those techniques that consist in the administration of mostly opioid analgesics (such as pethidine and morphine) through the intramuscular or intravenous route (therefore through a drip). These drugs cross the placenta and are then able to pass to the baby. Even the epidural (o epidural) and the spinal are two techniques of analgesia, because they still maintain an exchange of information with the areas we want to take away the pain. These two techniques differ from each other not so much in the localization but in the "depth" at which the analgesia is performed. Let's try to better clarify this concept of depth. Both analgesia techniques are done by inserting a catheter cable (very small quiet size) in the back, usually in the lower back between two vertebrae.

So the spinal it is deeper than the epidural. As an example, I would like to insert a link to a video made by a colleague obstetrician during the procedure of inserting the catheter to epidural. So when is one type of analgesia used rather than another?

Pain of childbirth and anesthesia

The pains of childbirth are certainly an experience that is difficult to repeat in other contexts, but we must note that they change throughout the process of labor. They will be more sustainable in the beginning and then become more and more intense in the expulsive period. Not all labor is short, and not all women are able to withstand pain for long. In this there is and does not want to be any judgment, each of us knows how far we can go in the endurance of pain and it is for this reason that the technique ofepidural or epidural analgesia.

Normally in spontaneous birth an epidural is proposed because it is less deep, as this birth is physiological and does not require particularly invasive surgical instruments. Furthermore, the epidural guarantees, if done well, the practically total suspension of pain for the entire duration of the drug's effect. We have emphasized that the drugs used are essentially opiates therefore it happens that after the insertion of the catheter in the epidural space the drug is injected at a specific dose, the minimum dose to guarantee the desired effect. At that point you just have to wait for it to take effect.

Why insert a catheter? As I said before, labor is not necessarily short, so a single dose of analgesic may not be enough. Having already positioned the catheter, it is easier to make the so-called "refill" or proceed with a new administration once the effect of the first is finished. I would like to clarify that it is not certain that the epidural can accompany you for the entire duration of labor. Normally it is performed no earlier than 4 centimeters of dilation and never after eight centimeters. The reason is that if it is done too early it can stop labor, if it is done over eight centimeters you cannot feel the pushes of the expulsive period and therefore the chances that you will not be able to "collaborate" in the birth of your baby increase.

The situation is different for the Caesarean section. This is a real surgery complete with a scalpel and sutures. In this case it is not possible that epidural analgesia can cover such a vast area of ​​action: skin, subcutis, muscles and then uterus for the entire duration of the operation without feeling pain. Therefore, the most used procedure in the case of a caesarean section is lspinal analgesia. The one a little bit deeper, just enough to ensure you don't feel pain. The injected drugs are basically the same, they can change the doses, meaning that they can be slightly higher or at more frequent intervals. But be careful, eliminating the pain does not mean that you are asleep (or we would speak of anesthesia) in the lower part of your body. You will feel, from a tactile point of view, that the gynecologists are touching, pulling, something in your abdomen but without feeling pain. Don't worry, you will not see what they do because your view will be obscured by a cloth, only after the birth of the baby will they bring you to see and cuddle while they finish the job.

Having said that many women ask me this question: is it painful to perform the epidural or the spinal? The answer is no. It may not be comfortable, and now we'll see why, but it's not painful. Let's talk about the technique of execution. As I told you before, a catheter, then some kind of very deep puncture has to be done which causes the same pain as a trivial intramuscular puncture. Because it has to go slightly deeper, between the bones, sometimes a light dose of local anesthetic is used to relax the skin and underlying muscles. So why do I say it's uncomfortable? Try to imagine this scene: you are in labor, you have contractions for about 2-3 hours at regular intervals. Inserting a catheter is not a job to do in 2 minutes, on the contrary you have to make sure it is done well and take all the time necessary. So surely a twitch or two during the procedure you risk having it. But there is a drawback, you have to stay still. Sitting, with your head tilted slightly forward and from there you cannot make any movement until the anesthetist has completed the procedure for inserting the catheter. That is why it is uncomfortable. You cannot move to relieve the pain in any way.

Epidural anesthesia risks and side effects

But are there any risks and possible side effects of these procedures? Yes, they do exist, it goes without saying that they don't. As for the risks, I would say that the most that can happen, if the analgesia is given to you in any hospital in the country, is that you get a little bit of headache or that analgesia has no effect. The inexperience of the anesthetist can bring the catheter too little deep, and therefore have no effect, or a little too much going to touch the spinal cord with the consequence of a headache for a few days.

- side effects instead they must be divided between the mother and the child. Some concern the actual mechanism of childbirth, while others are more closely linked to the physique of mothers and children. Let's try to list the most common. Let's start with the effects they can have on mom.

If the mother takes drugs, the dose and characteristics of the drug that we will use as an analgesic must be carefully studied because it can cause interactions (especially with cardiac drugs) with unpleasant effects. In addition, the analgesic slows down gastric emptying, so especially in the case of general emergency anesthesia, it can increase the so-called aspiration syndromes, that is, gastric material is inhaled and regurgitated (but these are very rare cases). The most common effects are basically hypotension, that is a very low pressure especially in the upright position that can force you to remain in a horizontal position. Finally, cases have been described in which epidural analgesia can provoke disorientation and confusion. On the child the effects are there, as we have seen the drugs pass the placental barrier even if in minimal quantities and are able to determine effects.

The main alarming effect is the reduced heart rate and therefore the onset of a dangerous state of anoxia (absence of oxygen). But usually all that happens is that the baby is a little bit asleep and not cooperating with the path of birth. This slowness is also reflected after birth, because the drug must be disposed of, with a slight difficulty in adapting to extrauterine life and breastfeeding.

Finally, the most common effect of the epidural (not of the spinal which I remember being used practically only for the caesarean section, so the effects are only those described above on mother and child) is linked to the mechanisms of spontaneous birth. The drug slows down and distances uterine contractions, lengthening labor for some time and increasing the risk of having recourse to operative parts, that is, for example, with the use of the suction cup. This is because neither the mother with her uterus nor the sleeping baby collaborate in the birth. However, all this should not scare you. What is important to me is that the childbirth experience is lived with maximum serenity and if this means epidural analgesia or caesarean section with a spinal cord, I don't see why I should judge it negatively.

One recommendation: inquire at the facility where you want to give birth on the various procedures in this regard. It's important.

add a comment of Epidural anesthesia: risks and benefits during childbirth