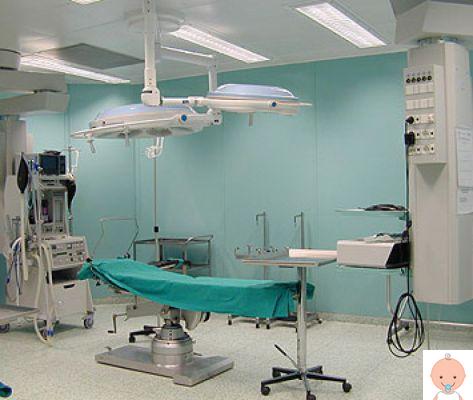 For me, caesarean delivery has always been synonymous with tranquility and speed, a "painless" method - from every point of view - to deliver babies. The large number of people who resorted to scheduled caesarean - not only for medical reasons but simply for convenience - confirmed to me the goodness of the method. until I went through it firsthand: the diagnosis of a 10 cm fibroid on the right wall of the uterus prevented me from giving birth naturally and the caesarean was an obligatory step.


READ ALSO: EVERYTHING YOU NEED TO KNOW ABOUT NATURAL, CAESARIAN AND EPIDURAL BIRTH


The first reaction was disappointment because my first child was born with a natural birth which, thanks to the epidural, today I remember almost like a walk despite the 18 hours of labor.

With the caesarean, however, I would have avoided even what little I had suffered, I would have known the exact day of the birth and this allowed me to organize myself better, something that I did not mind at all having a 4-year-old child to think about.

Those who had already gone through this experience reassured me: “Don't worry, it's nothing, everything passes”. "Do you want to put? No effort, no push, no suffering for you and for the child ... "," Do you think lady that in Brazil many women resort to this method because they do not want to damage their genitals. She is lucky! " the gynecologist tells me one day. In short, this caesarean really seemed like a panacea and I was beginning to think that by now only fundamentalist self-harming women remained to give birth naturally.


After listening to opinions, legends and the advice of "friends" I had to face a very different reality: the caesarean is not a walk, it is not a painless operation, it is a real surgical operation, the recovery is slow and very painful and the repercussions on the body last a long time, sometimes forever.

The day of Alice's birth I went to the operating room enthusiastic, thinking only of the child but the steel, the surgical instruments, the smells ... they immediately gave me a shiver in my back. It was all very fast for the doctors it's a routine, hospitals are now assembly lines - and cold, nothing to do with natural childbirth and the atmosphere that surrounds it: the anesthetist who teases you to see if you are well sedated, the anesthesia that works right up to the breasts, the sense of alienation with your body, the feeling that now they can do with you what they want because you no longer feel anything from the neck down, the nausea, the vomiting that causes anesthesia ... and then the smell of burning that makes you think of a fire in course while in reality it is the gynecologist who is cauterizing the wound. Because before you even realize what is happening you already have a 10 cm cut on your pubis.


Everything is different from natural childbirth, except the emotion you feel when you hear the first cry and see the baby. But

after birth, physically the worst is yet to begin.

READ ALSO: REDUCING THE NUMBER OF CAESARIANS, THE RECIPE OF BUZZI IN the city

Once you return to the room you are still under the effect of anesthesia and you do not feel any pain, but even if the painkiller is dosed through the drip it never covers 100% of the pain.

The second day after giving birth is, by far, the worst

. The painkiller is never enough especially when the witch-nurse forces you to take Metergin, a terrible potion that causes you to contract to expel the placenta residues. The contractions, however, after a cesarean take place on a cut uterus and the pain I felt, despite the doses of Toradol that I was regularly given, was

clearly superior to the pains of natural childbirth.

I got out of bed the day after the operation to be able to go to the bathroom alone and avoid the catheter, despite the twinges of the pulling points that forced me to walk at 90 °. The pain subsides a little every day but, even when you go home, you have to live with the Metergin contractions (

), the pain of the wound, tiredness and breathlessness, which assail you at the slightest movement.

READ ALSO: BREASTFEEDING AFTER THE CESAREAN

Six months after the operation

I still feel the tingling on the skin of my belly (but I have known people who, after years, it still hasn't passed) and if my four-year-old son hugs me at the wound I still feel pain. The belly is still a little noticeable despite doing gymnastics and despite being a thin person. It was explained to me (only long after the caesarean section) that all the organs are moved during the operation and that they take a long time - usually a year - to find their place. Not to mention the air that enters and which contributes significantly to swelling.

but it doesn't solve because the abdominals have been cut and the feeling is that, despite the fatigue, the muscles are not working.

I will never understand the choice of who, being able to give birth naturally, chooses to do so in the operating room.

The protagonist of this story about Caesarean and post-caesarean is Marta, who had told her entire pregnancy in installments, to read them click here

12 hours of labor and eventually a cesarean

All about the blood group of children ❯