Excessive hair in pregnancy. Here because 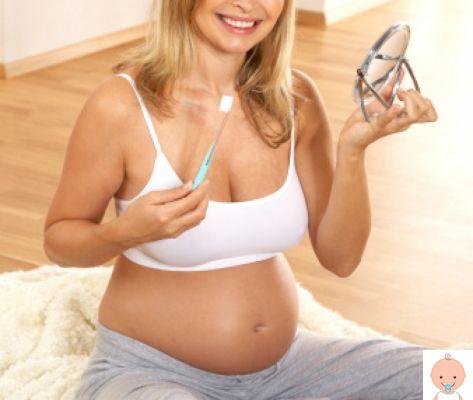 You may remember the case of Miriam, the woman of German descent who grew up there beard since she became a mother. Later also Drew Barrymore he had confessed to having lived motherhood with one excessive hair growth. But what does this change depend on?

Read also: Miriam, the mother proud of her beard


During pregnancy the woman undergoes many hormonal changes which often cause skin problems. Many expectant mothers suffer from acne, others from chloasma, also known as the "pregnancy mask"; it's about dark spots that appear on the face and usually disappear after delivery. For many, the expectation also corresponds to problems related to skin appendages such as, hair, hair and nails.


Disorders of pregnancy: a remedy for everyone

Pregnancy, characterized in fact by high levels of estrogen and progesterone, can he increase hair growth synchrony (on the face, abdomen, around the nipples, legs or arms), leading to periods of augmentation and others of hair loss. Hormones in pregnancy
Estrogen and progesterone they constantly increase during pregnancy to preserve the endometrium, prepare the mammary gland for lactation and suppress the development of new ovarian follicles.


Some pregnant women experience a increase of hair on the belly. Also in this case it is a normal hormonal disruption (more female hormones are produced to limit the range of action of the male ones).

It is usually a temporary phenomenon and the hair should spontaneously regress within six months of giving birth. If this is not the case it is possible to undergo laser or pulsed light sessions, but only after you have finished breastfeeding the baby. There are those instead like Miriam, the 28-year-old German woman, who has decided not to cut her hair grown after giving birth, stating that the beard is sexy for her.

Also Drew Barrymore, the actress, confessed to having had the same problem. Since she gave birth, her appearance has drastically changed. She jokingly admitted she had a wonderful red goatee, and to have suffered from hyperpigmentation on the cheeks

add a comment of Excessive hair in pregnancy. Here because