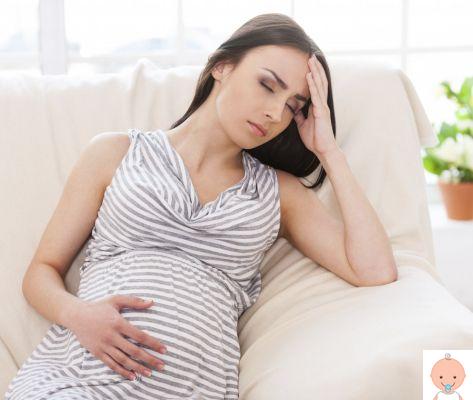 In pregnant women, contractions are generally associated with the onset of labor. But that's not always the case.

The first to study them was a London obstetrician - John Braxton Hicks - in 1872.physiological ontractions uterus which can occur during pregnancy as early as the third month, but which become quite common in the second trimester.

How the baby bump grows in nine months

Nine photos for nine months, to follow how the baby bump grows

Why do false contractions occur?

The uterus is a muscle which must expand a lot to make room for the child who grows and seeks more and more space. Because of this, just like all muscles, the uterus can contract, especially in particular periods of pregnancy such as the second quarter.

They often show up in the late afternoon or early part of the night and shouldn't cause concern.

How to distinguish them from real contractions?

Especially for women in their first pregnancy it is not always easy to distinguish false contractions from those that indicate the onset of labor. But some signs they can help you recognize them. Real contractions generally last longer, are more frequent and persistent and above all increase with the passage of time. They are regular and become more and more intense.

Read also: Contractions: this is how they work

Plus, false contractions usually aren't painful and do not affect the cervix.
If the contractions are accompanied by vaginal discharge, they lengthen, become more intense and more regular or if their frequency is approaching they could be the signal of an early labor so it is better to call the gynecologist or go to the emergency room.

And it is good to call the gynecologist to resolve any doubts, even if you are not sure if the labor has started.

False menstruation: how to recognize them and why they come ❯