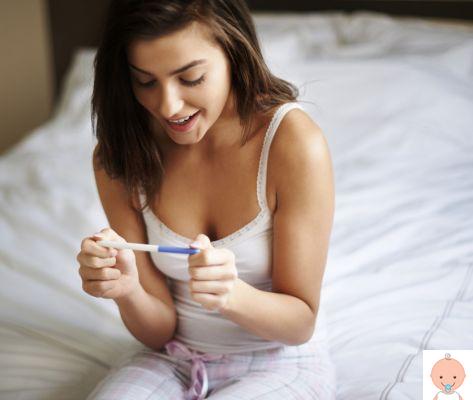 They are defined false menstruation light blood loss that occurs a few days after conception and, therefore, at the beginning of pregnancy. They may be mistaken for menstruation, but are actually implantation losses. Let's see how to recognize them and why they can arise.

How to recognize false menstruation

Le false menstruation, or implantation losses, are caused by the rupture of some small blood vessel in the uterus. This rupture is caused by the nesting phase of the embryo in the uterine walls. This is why they are called plant losses.

What happens in detail?

After conception it takes approx 10-14 days before the fertilized egg reach the uterus where it will nest. Sometimes this implantation phenomenon can cause slight blood loss, spotting, which could be one of the first symptoms of pregnancy. But, since the moment in which these losses occur often coincides with the one in which we expect menstruation, the question always remains: is it an implantation spotting or a cycle that has arrived?

Some experts claim that bleeding that begins with a brown or dark red color and becomes a red brighter is most likely an indication of the beginning of the cycle. However, it is worth reiterating that there is no way to distinguish implantation losses from early cycle spotting.

In reality we must pay attention to all those changes that we feel as anomalous or strange in our body: for example with the premenstrual syndrome breasts may be sore and tight, then soften and relax as menstruation begins. With pregnancy, breast tenderness and even a slight tenderness are one of the first symptoms of pregnancy and do not disappear with the onset of spotting.

In addition, false menstruation can also be intermittent, while menstruation begins with light losses which then become more abundant as the days go by.

False menstruation: when to get tested

The only way to understand if it is a false menstruation and if, therefore, we have become pregnant is to take a pregnancy test: the most modern ones can detect a pregnancy in progress just a few days after conception.

According to the experts i cramps painful associated with the implant, even if they can sometimes be intense, do not last as long as the classics generally last pains related to menstruation.

Implantation spotting, as we have seen, is generally characterized by minor leaks. In the event of a positive pregnancy test and profuse bleeding, the gynecologist should always be called.

Can I have a period during pregnancy?

Some women may experience slight bleeding during pregnancy, but it certainly won't be a full menstrual cycle. Menstruation can occur only in the absence of pregnancy. Each month with ovulation, an egg ready to be fertilized is released: on fertile days the uterine lining thickens to prepare to welcome the possible fruit of conception. If the fertilization should this not happen, menstruation will occur which is nothing more than the elimination of this uterine lining and the ovum itself. If there is a pregnancy in progress, ovulation is interrupted therefore menstruation will not occur.

False myths about conception: the 10 most frequent ❯

add a comment of False menstruation: how to recognize them and why they come