False myths about conception: the 10 most frequent 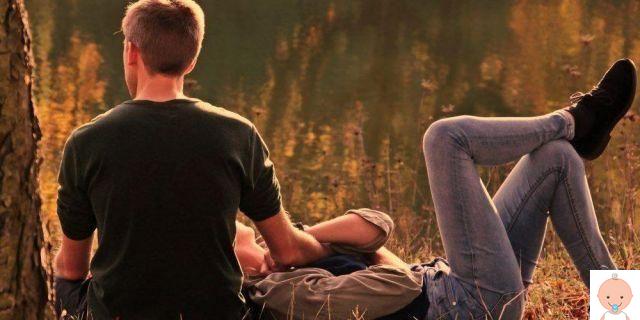 Moms, have you ever noticed how many clichés we are surrounded by every day? There are dozens of things surrounded by an aura of mystery and beliefs (often ancient) that must be unhinged. Do you want an example? Here it is. The strange belief that during pregnancy necklaces should not be worn because otherwise the umbilical cord could tighten around the baby's neck. There are also many false myths about conception, which arise in the often distant past and which are sometimes still children of a not quite complete knowledge of how our body works. Let's see the 10 most frequent.

Myths about conception: sex every day to get pregnant

Here is the first "hoax" on the subject of fertility and conception according to which to guarantee a nice baby bump in a short time you need to have sex every day. Did you know that, exactly on the contrary, this strategy could be counterproductive and lengthen the times? That's it. If stimulated daily, the spermatozoa weaken and their quantity is reduced. Consequently, the quality of the sperm also deteriorates and the pregnancy may not come soon.


More than the number of intercourse, what is really important is to try to concentrate them in the most favorable moments, that is, in the fertile days, those around ovulation. Always remember that spermatozoa survive in the uterine cavity even for several days, so it can also be beneficial to make love with your partner before the expected day of ovulation. Obviously we are assuming a regular cycle in which the ovulatory peak is recognizable and identifiable.

Let's say loud and clear to avoid misunderstandings: interrupted coitus is not a contraceptive method. And to demonstrate this, we quote a number provided by the el paesena society of gynecology and obstetrics (Sigo): every year 100.000 children are born because mum and dad have used this practice to be "safe". A substantial figure.

The fact is, you don't need a complete ejaculation to get your partner pregnant. Before orgasm, sperm leaks may occur which, although small, are able to fertilize a possible egg. So beware. Even during foreplay. If you are not trying to get pregnant, look for a really effective contraceptive and not improvise.

False myths about conception and locations

In reality, this is not part of the false myths about conception in the strictest sense because there is a grain of truth. Some positions during the sexual act would be able to facilitate fertilization simply because they facilitate the ascent of spermatozoa into the vaginal canal.

Here are a couple of examples for you. The penetration from behind or from the side is deeper and the sperm can get better into the uterine cavity. The same goes for the classic "missionary" position, with the man over the woman. Again, the push to the spermatozoa is more intense. The advice, however, is not to be influenced too much because otherwise your relationship will lose its spontaneity and passion, to become a pure "calculation" aimed at procreation.


Last thing. There is no correlation between positions and sex of the unborn child: there is no link, rest assured. If you have a male or a female, only the paternal DNA establishes it.

False myths about conception: breastfeeding does not get pregnant

Very false, let's deny it immediately. You have no idea how many "nursing babies" there are! Let's start from the scientific principle: prolactin inhibits ovulation. This explains why in women who breastfeed (especially if they do it exclusively and with many feedings a day) the menstrual cycle returns after a long time. But this is not a rule to be totally trusted: you could still ovulate, even without menstruation.

Again, so if you don't want another baby, take the right precautions. There are various types of contraceptives, including a pill (low-dose hormonal contraceptive) that can also be used while breastfeeding without any risk to the baby.

False myths about conception: fertility does not change

Oh maybe it were true! Fertility (in particular that of women, but also that of men) changes with the passing of the years. If a girl in her twenties has a very high chance of getting pregnant very soon, the same cannot be said for a more mature woman after the age of 35. If it is true that there are many "late" pregnancies, that is after the age of 40 (we talked about it HERE), it is also true that there may be difficulties in conceiving.

The fundamental problem is that, over time, the female ovarian reserve decreases more and more and, with it, also the chances of becoming parents. The man, on the other hand, continues to produce spermatozoa, but age does not play in favor: it has been seen that women with an older partner become pregnant more difficult and often undergo spontaneous abortion. Obviously we are generalizing: there are forty-year-olds who “peck the stork” on the fly and carry on their pregnancy without any hitch.


False myths: no conception with menstruation

This too is a profoundly wrong cliché. In fact, many people believe that with menstrual flow it is impossible to get pregnant. But it is not like that. It is true that it is more difficult, but not impossible. If you have a short cycle (for example, 25-26 days), ovulation can occur early and you can therefore be fertile even if you are menstruating.

It is therefore very important to learn about your body and above all the signals it sends us when we approach ovulation (in this regard we recommend reading Ovulation Symptoms, how to recognize them). Not all of us have a regular cycle of 28 days, so we need to "self-monitor").

False myths about conception: impossible to get pregnant at first intercourse

We would be curious to know according to what strange principle the first sexual intercourse of a girl or a woman should "preserve" from a possible pregnancy. There is no scientific evidence to support this idea. Once menarche appears (the first menstruation) you automatically become fertile and it doesn't matter if you are 11 or 12 or older. If unprotected, even the first sexual intercourse can hold some surprises. And, depending on the age of the protagonists, it could be a bit complicated.

It is obvious that only dialogue with one's own children can help in this sense. Explaining to them in detail how the human body works, in simple but direct words, also serves to keep them away from pregnancy. And since the subject is still a bit neglected at school, it is up to mothers and fathers to become, without shame, "teachers" for their children.

False myths about conception: the pregnancy test can be done right away

The result of a pregnancy test done right after full sexual intercourse will never be true. To become positive, these tests detect the presence of the hormone beta hCG, the so-called pregnancy hormone, in the urine. This begins to be produced by the body about 7-10 days after conception has occurred, so it is absolutely useless to buy the test immediately.

The best solution is always to wait for the delay of menstruation, even if on the market there are very early tests that can be done even 5 days in advance. We also remember that beta hCG appear first in the blood and then in the urine, so the blood test is certainly the most reliable.

Myths about conception: the pill is 100% reliable

The birth control pill is undoubtedly one of the safest contraceptives available to us women. Provided, however, that it is taken carefully and above all without forgetting. For example, it should always be taken at roughly the same time. Then there are some situations that reduce its effectiveness: among these vomiting and / or diarrhea within 4 hours of taking, interaction with some drugs (for example certain types of antibiotics or antidepressants). Also, if a tablet is forgotten, it must be taken within 12 hours of the time it is usually taken, otherwise the effect may be nil.

Let's change the subject but always on the subject. When I stop taking the pill to have a baby, do I have to wait or can I try right away? The answer can be given by the gynecologist, but in principle one should not wait to try to conceive. The only problem is that, immediately, the cycles may not be immediately regular and therefore you may have some difficulty in identifying the fertile days.

It is often thought that if there was no conception problem for the first one, it will be the same for the second pregnancy. Unfortunately, this is not always the case. If in the first experience the baby arrived immediately, perhaps in the first month of attempts, the following times may not happen and make you wait longer. Conversely, however, the exact opposite also occurs.

The truth is, nothing can be programmed. In addition to being physically well, which is the first pass to motherhood, there are also other variables at play, including a bit of luck, but not only. If, for example, many years pass between pregnancies, the underlying problem could be reduced fertility or the quality of the oocytes that is not exactly optimal. Always rely on a good gynecologist, especially if pregnancy does not arrive after a year of unprotected intercourse. Only the doctor can advise and guide you in the best way.

Making love in the room where the baby sleeps. Yes or no? ❯

add a comment of False myths about conception: the 10 most frequent