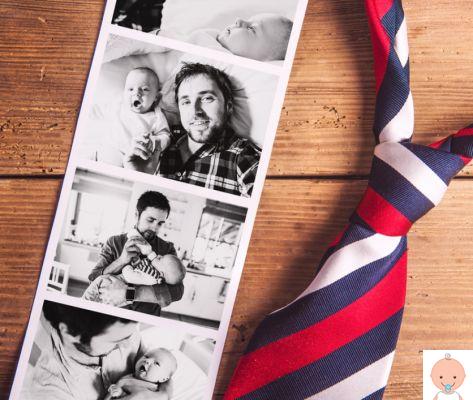 Il 19 March it is Father's Day, a very important celebration in a society in which this parental figure is increasingly re-evaluated within the family context. Unfortunately, for some time there has been a "decline in attention" towards this festival.
Perhaps because the period between February and March is already clogged with too many celebrations (Carnival, Women's Day) or because today's kids are too busy with a thousand chores and often forget to celebrate your dad. Often it is the fathers who give little importance to this holiday and most of the time this happens because they forget it, too busy with work and the problems that the average family and the village are forced to face every day.

However, this does not mean that fathers no longer enjoy their party; on the contrary, this increasingly widespread tendency to "forgetfulness" makes the unexpected gift from your child.

Read also: The most beautiful nursery rhymes for Father's Day

But let's try to explain now the origin and the original meaning of this festival. Father's Day, as we understand it today, is complementary to Mother's Day and was born at the beginning of the twentieth century. It is a civil event widespread all over the world which celebrates fatherhood and "fathers" in general on various dates of the year. The first Father's Day, of which we have documented news, seems to have been the 5 July 1908 in Fairmont, West Virginia, at the local Methodist Church.

It was the lady Sonora Smart Dodd which, inspired by the sermon heard in church on Mother's Day in 1909, she urged for the first time the officialization of the party. Mrs Dodd organized the celebrations for the first time on 19 June of the 1910 in Spokane, Washington. The choice of the month of June was due to the fact that in June we celebrated the birthday of Mrs. Dodd's father, a veteran of the American Civil War.

As in many countries of the Catholic faith, Father's Day in the country, March 19, coincides with St. Joseph's day, putative father of Jesus. In popular and religious tradition, Saint Joseph represents the example par excellence of the loving father and the devoted husband and for this reason he is also considered protector of orphans, unmarried girls and in general of the most unfortunate and fragile subjects of the society.

For this reason, especially in the past, in some geographical areas the feast of St. Joseph was accompanied by gestures of charity: for example, in Sicily on March 19 it was customary (in some places it is still used) to invite the poor to lunch. Father's day was initially declared a national holiday in the village, then abrogated, but it has remained an important occasion for families to be together and, especially for children, to celebrate their father.

Father's day around the world

In some parts of the world, the holiday is associated with fathers in their national role;

They are essentially there are two traditions linked to the feast of 19 March in the country: i bonfire and donuts. Since the celebration of March 19 coincides with the end of winter, in the past on this occasion the residues of the crops were burned in huge piles lit on the edge of the squares. During these rites, in which pagan beliefs and religious traditions are mixed, hymns to the Saint were sung and zeppole, the typical fritters of San Giuseppe, were prepared. In small towns, and in some cities, these traditions are still very much alive and heartfelt and make Father's Day even more cheerful and joyful.

In fact it is an opportunity, both for adults and for children, to rediscover the pleasure of being with the family. Ultimately, Father's Day can be not only a reason to rediscover serenity and harmony within the family, but also an opportunity to stop for a moment and take a break from the hectic and often lackluster life we ​​lead today. This is true both from the point of view of the celebrated, the fathers, and as regards children of any age. On this occasion, therefore, it is important to remember to celebrate the affection that fathers show us, even if they are very busy with work, and the moral support they reserve for us and on which we can always count, especially in difficult moments. Father's Day also serves to remind us to give the right value to family and to very important and very difficult role of the parent, which we often only fully understand when we become parents we too.

Streptococcus in pregnancy: prophylaxis, treatment and consequences for the newborn ❯

add a comment of Father's day story for children