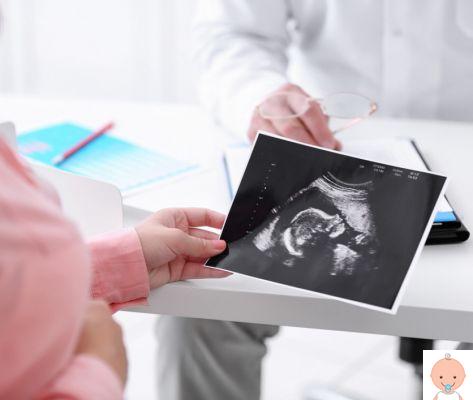 Retarded growth of the fetus

Il growth retardation of the fetus it is one of the complications that can arise during pregnancy and occurs when the fetus is not sufficiently developed for the gestational period. In technical terms, growth retardation is defined as a situation where the fetal weight is less than the 10th percentile therefore the growth of the fetus in the maternal uterus is slowed down compared to the values ​​considered normal.


It must be said that not always a growth retardation constitutes a real pathology, in fact also the fetuses constitutionally small, for example those born to short parents, may not reach the 10th percentile. Through the prenatal diagnosis systems it is possible to distinguish the situations of normally small fetuses from those in which there is a real slowdown in growth.

Through ultrasounds doctors manage to keep the growth of the fetus both in length and in weight. Based on the ultrasound results and the dating of the weeks of pregnancy, it is possible to establish whether the fetus is growing within the norm and towards the end of pregnancy you will also have a presumed estimate of your birth weight. When the doctor notices that the weight is not growing as it should, he can indicate on report two acronym which indicate the same problem:

How the fetus grows

At the beginning of pregnancy, the new life is formed by only two cells which then, as the weeks pass, multiply until they become a miniature baby. The different ones ultrasounds and checks carried out during the 40 weeks will be used by the doctor to assess that the growth is proceeding in the correct way and at the correct time. In principle we can say that:

The causes of this anomaly are many and in about half of the cases there is no clearly identifiable reason. The most frequent risk factor is having given birth to a child with stunted growth. Other factors that can cause growth retardation can be traced back to both the mother and particular conditions of the fetus.

The diagnosis of growth retardation is only possible through ultrasound although the gynecologist by palpating the maternal abdomen and approximately measuring the length of the uterus through the symphysis-fundus distance can get an idea of ​​fetal growth. In doubtful cases, ultrasound confirmation is required.

To diagnose a growth retardation however, it is essential to have an ultrasound that gives a precise dating of the pregnancy by measuring the vertex-sacrum length (CRL) during the first trimester of pregnancy or biparietal diameter (BPD) or transverse diameter of the cerebellum (DTC) before the 22nd week.

On the basis of correct dating, a biometry lower than the 10th centile for gestational age can be defined as growth retardation:

In order to evaluate the correct placental development a called analysis was also introduced flowmetry of the uterine arteries which is normally performed a 22-24 weeks of gestation.

Both types of stunting will need to be monitored because they still constitute a risky situation. When fetal growth retardation is associated with maternal hypertension, it is likely that there is a disease common to both subjects: lplacental insufficiency.

During its development, the placenta invades the wall of the maternal arteries that carry blood to the uterus, transforming them into larger and less rigid vessels capable of increasing the supply of oxygen and nutrients to the fetus. When this process does not take place in the correct way the placenta fails to respond adequately to the needs of the fetus and this causes a slowdown in growth. The maternal organism initially tries to compensate for this deficit by trying to increase the supply of nutrients to the fetus but this causes an increase in blood pressure which can lead to gestosis (or preeclampsia), a complication that carries high risks for the health of mother and baby.

Generally, fetuses affected by growth retardation are delivered before the expected date of delivery but only if the monitoring of the parameters available to doctors demonstrates that the'intrauterine environment it is no longer able to supply oxygen and feed the baby sufficiently. The choice of delivery will also depend on the gestational age, the severity of the growth retardation, the degree of fetal compensation and the health conditions of the mother (in the case of preeclampsia)

add a comment of Fetal growth retardation, causes and complications