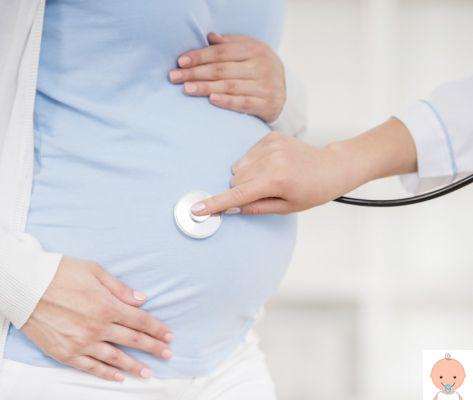 The term fetal macrosomia it is used to indicate a fetus that presents itself too much "Large" compared to standard parameters. The condition of macrosomia is found when through ultrasound it is deduced that the weight of the fetus exceeds i 4,5 kg. Male children are mostly affected by this anomaly and it has also been found that in about 40% of cases fetal macrosomia is determined by a genetic predisposition factor.

However, this is an issue that is the subject of many perplexities and discussions among the "experts", especially in the country, and which acquires particular importance in relation to the high percentage of caesarean sections that take place in our country. First of all, it must be said that the diagnoses of macrosomia are not always exact, this is because the methods for establishing the weight of a newborn are deductive therefore the results cannot be considered certain: theultrasound examination, thanks to which it is possible to find this condition, it can present a margin of error to be taken into due consideration. Numerous studies have also highlighted some risk factors which can cause this kind of anomaly, including:


It has been shown that during pregnancy, proper nutrition, adequate to the size and weight of the woman before conception, is crucial to avoid the risks of fetal macrosomia. A relevant incidence of this anomaly has been found especially in mothers with diabetes, disease which is one of the major risk factors. In this case, macrosomia can arise due to the environment that is too rich in XNUMX/XNUMX cup sugar in which the fetus grows and develops. L'hyperglycemia in fact it stimulates the fetus to produce more insulin, and insulin, which is a growth factor, promotes exaggerated development of the baby.

Fetal macrosomia can lead to complications during childbirth, due to the difficulty of the fetus to pass through the birth canal but can also be associated with insufficient development of some vital organs, such as the lung. The child at birth may not be able to breathe on his own and therefore run into that particular pathology called 'respiratory distress syndrome'.

Furthermore, it seems that in adult life the macrosomal child has a greater predisposition to the appearance of obesity, diabetes and hypertension. However, it is very important to evaluate the extent and extent of this anomaly especially in view of childbirth and in relation to the build of the future mother because, in the event that it is considered very difficult, or even impossible, the passage of the little one in the birth canal often the doctors decide to proceed with a Caesarean section.

However, some studies have shown that frequent use of caesarean section in cases of suspected fetal macrosomia is often unjustified and it turns out to be unnecessary most of the time. Although doctors declare to act in this way to avoid unnecessary suffering to both the baby and the mother, in reality often what prompts them to favor a caesarean section is the fear of having to face unpredictable complications that can arise during the labor.

The most recent guidelines on the subject instead tend to embrace the belief that there are no children that are too "big" or basins that are too "narrow" but that each single case must be considered a story in itself. From this point of view and since it is very difficult to be able to make predictions on how the mother and the child manage to adapt to the phenomena of childbirth, it would be advisable to try to make the future mother cope with labor by proceeding with medical interventions only if necessary. from any complications.

Mom in the ninth month of pregnancy ❯