Fetal movements before childbirth: how they are and how to recognize them 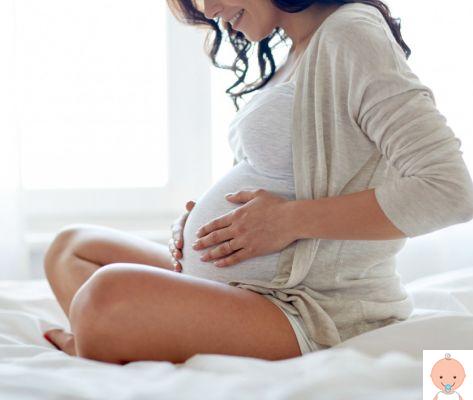 If throughout the pregnancy the baby has had a lot of space to move, change position, kick and elbow, by the ninth month of pregnancy we may feel less agitation. Most fetuses calms down in the life of childbirth and indeed there is no greater room for movement within the baby bump. But how to monitor the fetal movements before delivery?

How are the fetal movements in the ninth month

If starting from the fourth month, more or less, the baby's movements have been perceived frequently during the day and in a clear way, towards the end of pregnancy the space inside the baby bump is really small and the baby is unable to make the evolutions to which he had accustomed us. Despite this, precisely in the ninth month, near the birth, the mother will have to pay attention and be able to feel the movements of the fetus which must not be less than ten a day.

Only in this way will we be sure that the baby gets proper oxygenation and is in good health. If we do not feel any movement for too long it is good to call the gynecologist or go to the hospital.

As we have said, in most cases the baby calms down in the last trimester: space is limited, he is older, but it is still necessary to make sure that he moves during the day. Often if you observe the baby bump you can clearly see how it moves, also by patting or caressing the belly it will respond to stimuli with a kick or an elbow!

Di notteWhen the mother is lying down and the space in the uterus becomes even tighter, the baby is likely to move more (making the mother-to-be's nights restless and sleepless). On the contrary, during the day, the movements of the mother lull him making him rest.

When labor is imminent, the baby may seem more agitated, but this is not always the case and in any case do not worry because there is no evidence that if the baby is agitated it can increase the risk of complications during delivery.

When the fetal head is channeled

Ahead of the birth, the baby's head will begin to funnel into the birth canal. This movement may typically occur a couple of weeks before delivery (but it is very subjective and in some women it may be channeled a few hours before the onset of active labor).

What changes? The belly "falls", the pressure under the diaphragm and abdominal level is released and this allows you to breathe better.

How to understand what is missing from childbirth

How to understand that labor is imminent and what are the signs to watch out for?

The first symptoms of labor are:

Fetal movements: when to start and when to worry ❯

add a comment of Fetal movements before childbirth: how they are and how to recognize them