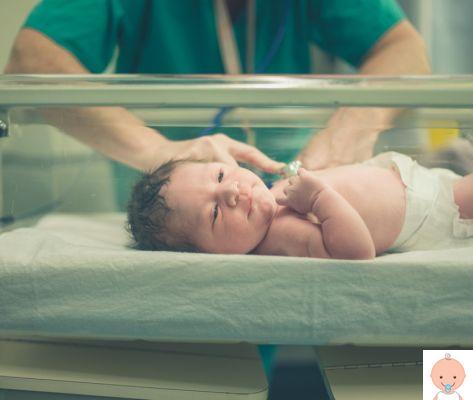 One of the most urgent causes for intervention during childbirth is the fetal suffering. In itself the word can indicate different cases and different severities but we can say that it is thus defined a state in which the The baby's heartbeat remains below normal (which at term of pregnancy is between 120 and 160 beats per minute) for a prolonged period of time.

The causes of fetal distress

I was saying that it can represent different series because it is associated with both brain pathologies or malformations of the child (already known therefore with ultrasound scans) and with sudden events during childbirth. Specifically, what causes the child to suffer sudden suffering is the lack of oxygen and therefore any conditions that result in reduced blood flow to the baby's brain can lead to it. To name a few of the most common:

Read also: What the baby feels during labor

Symptoms of fetal distress: how to notice it?

Fetal suffering caused by malformations or brain pathologies can occur at any time during pregnancy, but typically both acute (sudden) and pathological origin occur during labor. Once you get to the hospital for the birth they will go away two ultrasound probes (such as those for external ultrasound scans) on the tummy, one measures the extent of the contraction and the other the baby's heartbeat. The machinery to which these probes are connected, said cardiotocograph, will record the data on a traced and through the interpretation of this the operators will know how your child is.

During labor it is not always necessary to remain connected to the cardiotocograph so if it is not necessary every 15-20 minutes the obstetrician will take care to check the heartbeat of your child with a portable ultrasound probe, so that you always have the situation under control.

What happens if fetal distress is found?

Most likely in those moments little will be explained to you, that is, once the doctor has evaluated the trace and established that the heartbeat is not good, he decides to intervene with an emergency cesarean section. The typical phrase that is said to mothers is very similar to: "Madam we have to intervene with a caesarean section because the baby is not well". You can try to ask, you or whoever accompanies you, for some explanation on this but my advice is to wait after the surgery. In that case they will be much more available to answer your questions and calmly explain everything you want to know about the reasons for intervention.

What are the long-term consequences of fetal distress?

The two cases must be distinguished again.

As for the correlation between fetal suffering and the development of autism at this time there is not enough scientific evidence about it, especially because we do not yet know what the triggering cause of autism itself is. However, I would like to reassure you that the cases in which major consequences of acute fetal distress have occurred are limited to periods of truly prolonged lack of oxygen. Taking into account that in most hospitals and villages it takes between 7 and 10 minutes from the decision to have an emergency cesarean to the birth of the child, we can consider this time as safe because there are no long-term consequences.

add a comment of Fetal suffering: causes and symptoms