Fifth month of pregnancy, what happens? 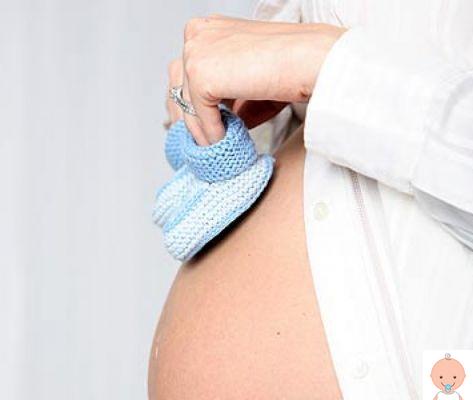 Il fifth month of pregnancy is the period perhaps top of pregnancy. The nausea ceases for almost everyone and one feels fit and full of energy. You are likely to be hungrier. You don't have to limit yourself and impose on yourself strict diets but you don't have to eat for two with the excuse that you are pregnant.


It is also the period of possible others disorders such as varicose veins, stretch marks, hemorrhoids and cellulite. This is due to poor circulation. Let's see what happens to the fetus this month and how the body changes.

The fifth month of pregnancy begins at 17 weeks and 5 days and ends at 21 weeks and 6 days.

Fifth month: the weeks of pregnancy

Let's see what happens to the mother and the baby week by week.

What happens to mom

During this month you will feel your baby's first movements. The abdomen continues to enlarge, also because the muscles relax to allow the fetus to continue growing inside the uterus.
The nipples darken. Sometimes some spots may appear on the skin.

If you have not already done so, always grease the skin of the whole body but above all of the breasts, hips and belly with sweet almond oil or with creams and ointments anti-stretch marks, but specific for pregnancy.

If in the first quarter the weight has increased very little (or at least it should be), in the second quarter it is expected to increase by about 300-500 grams per week. It is important to constantly monitor your body weight which should not exceed 12 chili throughout pregnancy.

What happens to the baby

The child is almost fully formed. The weight of him in the fifth month of pregnancy is in fact 240-250 grams, for a length of about 20 centimeters.

It is able to perceive i sounds then talk to him and let him listen to some sweet and relaxing music.

It begins to move more and more but for now it still has room to do it freely in the belly and you may not be able to feel its movements which at first seem similar to a flapping of wings.

Here is a picture of the fetus at the 19th week of pregnancy.

Belly hard in the fifth month of pregnancy

It may happen that a bulge appears on the belly: it's your baby leaning against you 'from the inside' and maybe it's a foot, arm or head. Caress this swelling slowly, to show the little one all your love. At the same time it can happen to feel the hard belly: can be caused by the shift of the child but can also be a physiological event completely normal. It can occur especially a end of the day when you are most tired. A doctor should be consulted if the stiff stomach persists for a long time and is accompanied by dark colored blood spots.

Pain in the lower abdomen

These pains are also quite common. They are usually caused by the changes taking place in the uterus, but they can also be preparatory contractions that generally last a short time. It is necessary to worry and consult the doctor if these contractions become regular and more and more close together.

Tales: how a flower is born ❯

add a comment of Fifth month of pregnancy, what happens?