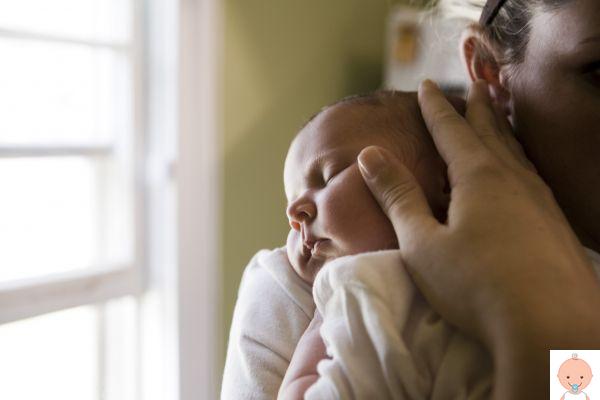 The first month of the newborn is full of surprises. Every day is a new day, in which we notice something we hadn't noticed before and that makes us fall in love more and more madly. Who knows how much each of us dreamed of the moment when she would be at home with her little bundle. And now she is there, all for us, all to be discovered, touched, smelled, lived. But what physically happens to a baby in the first 30 days of his life? How do his functions and his "abilities" change? Let's go on a little trip together.

First month of the newborn: height and weight at birth

During pregnancy, thanks to ultrasound scans, estimates of the weight and length of the fetus are made. However, know that they are not precise measurements to the millimeter: they are, in fact, hypotheses, based on the calculations of the gynecologist, but which are susceptible to changes.

At birth, a weight ranging from 2,5 to 4,5 kilos is considered normal. The average weight is 3,3 kilos, with some differences between males and females. Generally, the former are a little more "chubby" than newborns. The average length is 50 centimeters for both sexes. It is clear that the "dimensions" may also depend on those of the parents.

Height and weight are also influenced by external factors. The children of a mother who smokes or drinks alcohol while pregnant are more likely to experience low weight (as well as a long list of other problems). It is always good to remember to give up these bad habits.

After giving birth, there is a so-called physiological decline, a very normal weight loss equal to about 5-8% of the birth weight. It is caused by the passing of the first stool (meconium), the loss of fluids and the ingestion of still small amounts of milk. The decline usually recovers within a couple of weeks.

First month of the newborn: growth

On average, a newborn takes about 20-30 grams per day, which is about 140-210 grams per week. They are not "rules", each child is unique. The faster the growth in height. During the first month, the little one will stretch about 5 centimeters (keep this in mind when purchasing her rompers).

It also increases the head circumference. On average at birth it is 35 centimeters and, in the first trimester, it will grow by about 5 centimeters.

First month of the newborn and physical appearance

The head is the most voluminous part of the body of a newborn baby. Compared to the trunk, the limbs are shorter, especially the legs. With growth, the proportions will become normal. The garment is very delicate because the fontanelles have not yet joined. They recognize each other because they appear as depressions on the head. At birth, the baby may already have a lot of hair or be almost bald. It is perfectly normal for hair to fall out after some time, especially on the back of the head, the one in contact with strollers and cots.

There may still be some vernix residue after giving birth. It is a substance produced from mid-pregnancy onwards that serves to protect the skin that could macerate due to the amniotic fluid. In addition, the skin is covered with fine hair. It is the so-called fluff, which will disappear by itself. The classic "wrinkles" of the skin of newborns will gradually become smooth.

First month of the newborn and movements

Your child has practically been on the move forever. He was tiny in the belly and was already darting here and there. Growing up he started kicking that neither did Bruce Lee and he did that until he saw the light. This "perpetual motion" continues after birth. The baby moves his head and legs, sometimes makes jerky movements or grimaces, attaches his arms or has some tremors. All perfectly normal.

Already in the first month of the newborn, some fundamental reflexes are present, which will then be lost with development. These are the most common:

First month of the newborn: what he sees and what he hears

Already in the belly, the baby hears external noises and the voice of the mother who speaks to him. At birth, therefore, hearing (as well as touch) is already developed. The sight, on the other hand, is not yet fully mature.

As soon as it is born, the baby can see at a not too high distance, about 20-25 centimeters. As during pregnancy, he is able to distinguish dark from light and turns his head towards a light source, which he already did when he was just a fetus. He is attracted to colors and shapes, but he cannot yet define the details well. His attention is mainly directed to the faces, even if for a few seconds.

First month of life: how much and how he sleeps

Let's clarify immediately: babies are not made with the mold. They are all different from each other and there are no valid “instruction manuals” for each of them. And therefore there are no fixed rules. In general, however, in their first month of life, all newborns sleep a lot. They spend most of their day having sweet dreams. The waking time will gradually lengthen.

On average, an infant sleeps 16-18 hours a day. The awakenings are dictated by a single need: that of eating. The time interval is variable. Breastfed babies usually need to latch on more often, but don't think formula feeders sleep all night. Especially in the very early period, awakenings are the rule, nights of full sleep the exception. Also, alas, children make no distinction between day and night.

There are not many alternatives on how babies should sleep: we just talked about it HERE.

First trimester of pregnancy: what to know ❯

add a comment of First month of the newborn, everything you need to know