First teeth, what a torment! Here's how to relieve the hassles 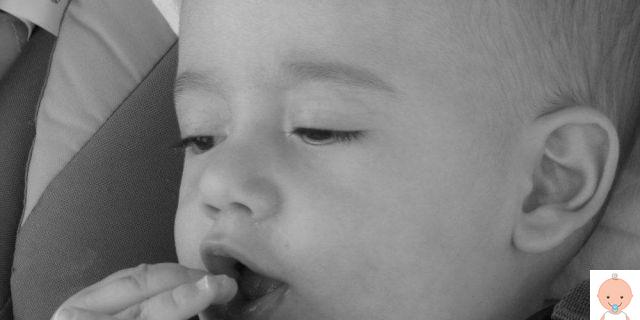 Usually, the "tragic" moment occurs between 6 and 8 months: the first teeth appear and, with them, trouble comes. In fact, children can be very disturbed and, if there is no "strange" symptom, know that it is a rarity and that you are one of the few lucky mothers. The others must arm themselves with a good dose of patience: the annoyances of the first teeth will pass and we will give you a hand to deal with them, starting with the most classic of questions, that is, how many months do babies start to get their teeth.

The teething of the newborn

When does teething begin in infants? The "calendar" is variable and the girls seem to be a little earlier than the boys. Generally, the 2 lower median incisors (which appear approximately 8-10 days apart) are the first to appear. The others arrive every two months or so, but even this is not an absolute rule. The next are the 2 upper median incisors, then the 4 lateral incisors, the first lower molars, the canines, followed by the other molars.

The appearance of the first teeth is announced by a series of signals: a little practice is enough and every mother immediately understands when there is a tooth on the way. For example, the child brings whatever comes within range to his mouth and "chews" his little hands as if there was no tomorrow. Another symptom is profuse salivation: snails are amateurs in comparison! Often the little one is nervous, has disturbed sleep or just struggles to fall asleep, eats little. In fact, there is a correlation between infant teething and loss of appetite.


Although there is no certain scientific evidence, the first teeth can also be accompanied by colds, sometimes low-grade fever, angry cough and some intestinal problems. Maybe your grandmothers told you about "tooth poop" or you heard about baby teething and diarrhea. In fact, softer stools appear to be caused by nervousness and the increased amount of saliva produced.

The gums appear red, swollen and inflamed. Fault of the tooth that, pushing from below, causes inflammation and consequent pain. Those of you who have experienced the "joy" of feeling your wisdom teeth grow well understand what we are talking about ...

How to relieve toothache in infants

How to relieve toothache in newborns? First tip: lots, but really lots of pampering! Second: let him bite the classic objects to be refrigerated in the refrigerator, the so-called teether. Cold is a natural anesthetic, so improvement will be assured. In addition, the rough part exerts an effective massage. According to the same principle, you can wipe the gums with a linen or cotton handkerchief moistened with fresh water. There are also many types of baby teething gels on the market.

Among the remedies for teething babies, do not give too hot foods for lunch or dinner. The same goes for baby bottles too. Always let the baby food cool down because the heat increases the sensation of pain. If you are breastfeeding, offer the breast often to the puppy: in addition to feeding him, it is a great consolation for him.

Among the things to avoid is the amber necklace for baby teething which was once suggested as a method to reduce the discomfort of teething. Apart from the fact that there is no scientific evidence on the alleged benefits, this object is risky: if a few pieces were to be detached, the child could suffocate.

You can give honey for the first teeth

Once it was suggested honey (rosé or acacia) to be massaged on the gums: it is true that it gives relief, but it could promote tooth decay (that's why not even a pacifier should ever be dipped in this sweet substance). It should also be remembered that honey should not be given to newborns for another reason: there is the danger of infant botulism.

Instead, choose ointments made from natural products with calming properties, such as chamomile, thyme, calendula or mallow. It is always better to ask the pediatrician for safety.

Usually, when the first teeth appear, the real pain is at night because the discomfort seems to increase. One tip is to try to get the baby to sleep in a slightly elevated position to avoid blood rushing to the gums. No pillows though to keep cot death at bay! Better to pull up the mattress a little.

What drugs can be given for toothache

Chapter drugs for toothache in infants: never do it your own way. Your doctor must be the one to advise you. Call him even if it seems to you that the child is in too much pain.

First steps, how to choose the most suitable shoes ❯

add a comment of First teeth, what a torment! Here's how to relieve the hassles