First week of pregnancy: what happens? 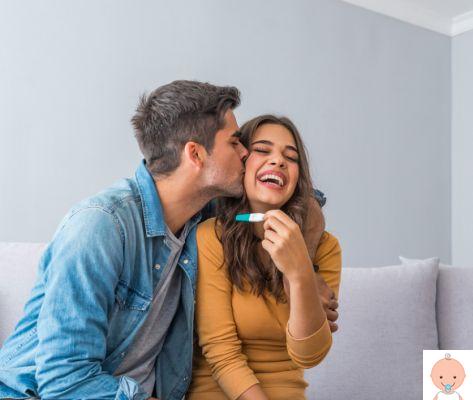 Pregnancy lasts an average of 40 weeks, and each week holds unexpected surprises and big changes, both for the growing baby and for the mother. But why exactly forty? It is an estimate based on the maturation of the fetus which at that point turns out to be ready for extrauterine life. But be careful, the pregnancy could last even shorter or longer is considered a full-term pregnancy by 38 to 41 weeks.

Symptoms of the first week of pregnancy

During the first week of pregnancy there is no sign that she is pregnant. Also because the menstrual cycle is not yet late, the weight is the same and you do not have the classic nausea of ​​pregnancy yet. It is good to remember that the weeks of pregnancy are counted when conception has not yet occurred. In fact, the first week begins with the first day of the last menstruation, according to the calculation of thegestational age. While the conceptional age it is calculated from the first day after conception.

Fatigue in the first week of pregnancy

It is normal to feel fatigued and even exhausted during the first few weeks of pregnancy. Fatigue, even particularly persistent, is frequently an early sign of pregnancy that almost all women experience in the first trimester.
In the first months, the main causes of fatigue are:

Symptoms of the first week of pregnancy after conception (conception age)

You may feel some swelling in your breasts, but that you may be attributing to ovulation or ovulation premenstrual syndrome, and a little bit of fatigue. In this first week the hormones are already starting to work, but they are not sufficiently intense to make you feel the presence of a change. The main hormones of pregnancy are the estrogen, progesterone, prolactin and oxytocin. Their complex collaboration in an alternation of peaks and troughs allows the pregnancy to continue, to reach term, for the baby to be born and for breastfeeding to start.

It is certainly still too early to have the most classic and well-known ones symptoms of pregnancy, such as nausea or abdominal cramps or other symptoms, and of course it is too early to take a pregnancy test, also because officially you are not yet delayed in period

How the body changes in the first week of pregnancy

Your body is not showing any noticeable changes yet, however if we count the first week according to age conceptional, and it happened on conception, a lot is happening inside you without you noticing. The whole organism is changing, to prepare to welcome the child it will have to grow for nine months inside the belly. For example, estrogen levels are increasing which can give you an extra charge of energy, as well as progesterone levels, which together with prolactin are responsible for all the changes that occur in pregnancy, such as breast changes, augmentation. of temperature and possible constipation.

First week of pregnancy, how the baby grows

At this stage it is still early to talk about a child. After fertilization, the egg divides and divides again, until it looks like one small blackberry 150/1000 of a millimeter. During a week of pregnancy, there is talk of one morula. The fat cells of the morula are placed in the center and form the embryonic disc, that is, the future embryo. The small cells that arrange themselves around the morula become the placenta.

During this week of pregnancy, the fertilized egg migrates from fallopian tubes towards the uterus, this stage is called planting or nesting, which occurs around the 5th day and is completed by the end of the first week. At this point the embryo is anchored to the wall of the uterus and development can begin.

At the end of the first week of pregnancy, the embryo measures 0,1 millimeters.

First week of pregnancy, the curiosities

It is the sperm that determines the sex of the baby. Each sperm contains two X and Y chromosomes, while the egg contains only XX chromosomes.

So it all depends on which chromosome is delivered by the sperm: if there is XY in the DNA, a male is arriving; if, on the other hand, there is XX, a female is coming.

Many of you will have heard of the grandmothers of the moons, and how the lunar cycle conditions the parts. If we think of popular culture a lot was calculated with the lunar cycles and seems to have little correlation with the scientific method. Grandmothers often say they gave birth after 9 moons. Yet if we calculate 10 moons of the same type from the conception moon (for example full moon), the 10 full moon will be approximately 40 weeks.

First week of pregnancy, what to do?

The midwife recommends for the first week of pregnancy the intake of folic acid which is effective in preventing neural tube defects (eg spina bifida) in the fetus. Studies show greater efficacy if the intake begins at least two months before conception, so when a couple decides to start the search for pregnancy it may be useful to contact their GP for a prescription for folic acid.

Calendar of 40 weeks of pregnancy

If you want to know more about the others 40 weeks of pregnancyWe have created a nine-month calendar with advice on health, nutrition and tests to be done during the 40 weeks. You will also be able to find out about the changes in the mother's body, how the baby bump grows and how the fetus develops.

First teeth, what a torment! Here's how to relieve the hassles ❯

add a comment of First week of pregnancy: what happens?