Firstborn, how to handle the arrival of a little brother well 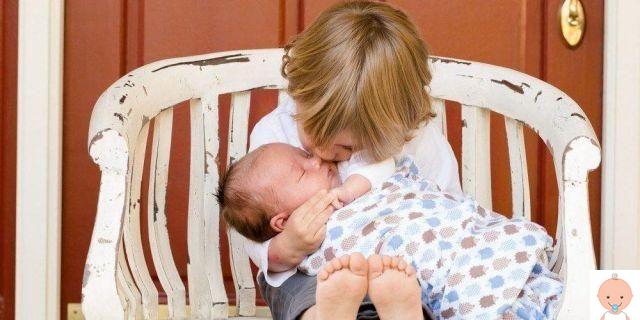 How many firstborn among you? And how many years of difference do you have with your brothers? These are not questions to start one of those funny and improbable tests on character peculiarities, but a short journey back in time to better understand how to behave when you become the parent of more than one child.

I experienced firsthand the experience of passing from an only daughter to an older sister, who is 7 and a half years older than the one who has become my best friend today. But the path was not easy because, in my case, I immediately felt I had to be the responsible sister, the one who was always attentive and this made me lose a little the carefree nature of the child.

The reactions of the firstborn to pregnancy

Difficulties often arise due to the sudden change in the daily gestures of parents, who find themselves having to face different needs. On the one hand those of the newborn, on the other those of the firstborn. Children who, especially if very young, have not yet acquired the tools for analyzing and understanding the new family balance.

In particular, children under the age of 4 tend to show a strong jealousy towards the newcomer, but it is a "healthy" and physiological reaction that must be channeled and managed by the parents in a certain way, in order to transform it into an opportunity for growth and self-confidence.

Because the firstborn are jealous

The first-born are naturally jealous of their parents, of that dimension of uniqueness that they feel they have lost: a manifestation of insecurity due to the fear that the love of mum and dad is no longer the same as before. Anger and hostility, constant challenges are typical of a feeling of jealousy. Sometimes even minor ailments appear on the body, namely a clear somatization of the problem. Another modality concerns regressions: peeing on oneself, wanting a pacifier, speaking less clearly are among the most frequent actions.


Often children ask for a little brother, but this does not mean that, in reality, they do not encounter small inconveniences made up of jealousies and grievances. Indeed, the newcomer is perceived as a threat. A stranger, an intruder, a rival who takes his place in the arms of mum and dad. The fear that is unleashed is linked to the anguish of being abandoned, set aside and rejected. Here the reactions are different.

So what should parents do or not do? Of course, they should not expect a 2 or 3 year old child to be able to accept and understand "as if he were grown up". In truth, he is not, and he should not be forced to take on the role of "big brother". Mum and dad, on the other hand, must help him along the way by underlining all the positive aspects that he will be able to benefit from thanks to the arrival of their little brother.

The watchword will therefore be involvement. The more the eldest child will be involved in the waiting process, in the choice of the name, the clothes, in the future care, the more she will feel important and will understand that she has a very special role within the family.

Furthermore, almost always, the newcomer will have different behaviors than those held by the firstborn, just as the parents will behave differently beyond the efforts they will make to maintain an apparently equal line over time. So it is always preferable to avoid comparisons on all levels. Children are unique, as are the personal attitudes they will later develop (regardless of the input they receive). Most of the time, in fact, the "capricious" days of the greatest are only fleeting.

It is important to confirm your love for the firstborn and gradually teach him to share it with the youngest. Before your little brother is even born, it is best to inform him of what is happening and answer his questions. During breastfeeding, which is a delicate moment, you can have the older one assist, addressing him with great tenderness and affection, demonstrating that love for him remains intact and constant.


Firstborn: the role of the father

The role of the father assumes great importance in these cases. It is he who can dedicate exclusive time to the firstborn, sharing experiences that make him feel older. The father can show him what is outside the walls of the house, introducing him to the social world.

Finally, showering the firstborn with gifts (we always talk about children under 5) to keep them good is one of the most common and least effective mistakes. What they are really looking for is confirmation that they are still important in terms of affection and space. Parents must arm themselves with holy patience and avoid focusing only on the smallest or, vice versa, neglecting it just to please the older one.

Pros and cons of the father in the delivery room ❯

add a comment of Firstborn, how to handle the arrival of a little brother well