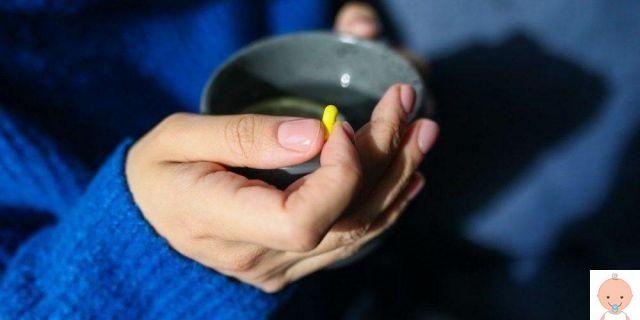 It is well known that folic acid is useful for preventing certain malformations of the fetus, and therefore it is absolutely advisable to take it in the first months of pregnancy. More recent studies, however, have shown that folic acid can also be effective in promoting conception, essentially to increase the chances of fertilization.

What is folic acid

Folic acid is a B vitamin, found mainly in some fruits and vegetables. It is a very important element for the health of the organism, since it is used by the human body for the reproduction of cells.

For this reason it becomes even more important to take it adequately during the first three months of gestation (starting from the first month of pregnancy), precisely because it favors the correct development of the baby. In particular, it helps to significantly decrease the probability that the unborn child may have some malformation of the neural tube: the most frequent are spina bifida and anencephaly.

Which foods are richest in folic acid

Some foods are higher in folic acid than others:

- green leafy vegetables: broccoli, spinach, lettuce, asparagus, etc;
- legumes, such as peas and beans.
- some types of fruit, in particular kiwis, oranges, lemons and strawberries.
- dried fruit, such as walnuts or almonds.

In fact, folic acid is also present in foods of animal origin, such as liver, other offal, eggs and certain cheeses. However, in general, these are foods that should not be exceeded, especially during pregnancy.


The big problem is that the folic acid naturally present in some foods, due to their storage, preparation and cooking, is often largely destroyed.

For this reason, when the need increases and it is necessary to regularly take a quantity that is correctly assimilated by the body, it becomes essential to supplement the diet with an additional dose of folic acid (about 0,4 mg per day in a healthy woman). . When pregnancy is at risk, for example in women with diabetes or those taking drugs for epilepsy, or if there have been other cases in the family of people with neural tube defects in the past, the dosage recommended by the doctor may be higher. It can go up to 5 mg per day.

Folic acid in the preconception phase

What perhaps not everyone knows is that the intake of folic acid is not only useful for reducing the risk of problems related to the neural tube of the fetus. It appears that it may also be important in increasing the chances of getting pregnant. Any woman of childbearing age who wishes to plan a pregnancy, or at least not exclude it, should start taking folic acid regularly, obviously according to the directions of her doctor.

A large study carried out in Denmark has shown very encouraging data on the use of folic acid in correlation with increased fertility. About 4.000 women who had planned to become pregnant were examined. The aim was to have a more general picture that would confirm what was already supposed following previous, more circumscribed research. Analyzing larger numbers, it was concluded that folic acid intake can increase the probability of fertilization by 15%, especially in those women who generally have an irregular cycle, too short (less than 27 days) or too long ( more than 30 days).


The study also showed that if you continue to supplement your diet with folic acid, after taking it for a year already, the chances of getting pregnant remain the same, they do not increase. Most likely the beneficial action of folate manifests itself in a rather short time, after which the effect remains stationary.

As already mentioned, the Danish study showed that folic acid intake is particularly useful for women who do not have a very regular menstrual cycle. This most likely depends on how folate affects the hormones of the cycle itself, but it is also possible that folic acid affects DNA methylation reactions (it is a type of modification) or the accumulation of homocysteine ​​(an amino acid present in the blood ).

As early as 1998, in the United States it was decided to add a small percentage of folic acid to flour: this is why we sometimes speak of fortified foods. Thanks to the inclusion of 140 micrograms per 100 grams of cereals, it is estimated that the incidence of spina bifida among newborns has decreased by 23%. A truly significant percentage, especially when compared to the data coming from Great Britain and many other European states that have not made the same type of choice. Here, in fact, the number of sick children has remained more or less constant over the last twenty years.

Since not all women, unfortunately, follow the instructions of doctors who, for some time now, have been recommending the regular intake of folic acid at least in the first three months of pregnancy (even better if it starts well before conception), create so-called foods fortified (especially flour, widely used) could be of great help. The US experience has shown this, also because it seems that any negative side effects can be absolutely ruled out.

To reach the conclusion that folic acid may play an important role in increasing fertility, studies have also been carried out on some animals, such as monkeys, mice and hamsters. In the latter, for example, it was noted that feeding the females with a diet completely free of folic acid in the 16 weeks prior to mating, they all turned out to be infertile. Even with mice, similar experiments have led to more or less the same results: reducing the intake of folic acid, there is a significant decline in fertility.

add a comment of Folic acid, why start it with conception