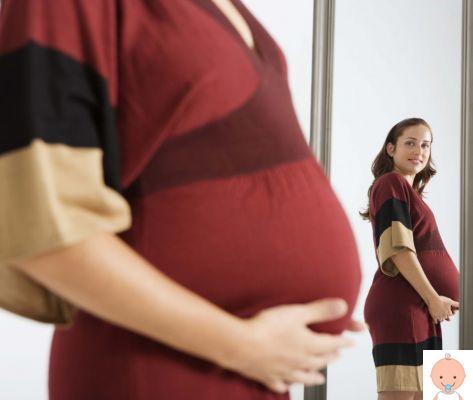 
From the fourth month onwards theuterus it cannot be contained within the pelvis, and its upper extremity can be palpated in the abdomen providing the gynecologist with an index of fetal growth.

Fourth month of pregnancy, how many weeks is it

The fourth month of pregnancy begins 13 settimane + 2 days and ends in 17 settimane + 4 days.

Symptoms in the fourth month of pregnancy

Read also: The baby in the fourth month of pregnancy

Analyzes and ultrasounds to do

You have now reached your second prenatal visit to the gynecologist, perhaps combined with aechography. You will then be able to see the baby's head and body take shape. You will feel like butterflies flying in your stomach which could mean that the baby is moving. The life line will begin to disappear. If you have not already done so, subscribe to childbirth preparation courses: attending them during this period is useful for discussing notions on diet, gymnastics, the best positions, emotions, health.

Weight in the fourth month of pregnancy

It will be from now on that the weight gain will get more obvious.

If it has been around 1 kg up to now, it will proceed at an approximate rate of from now on 400 gr per week, until realizing, if there are no particular dietary restrictions, an increase at the end of gestation from about 9 to 12 kg.

The weight gain is not only due to the weight of the child: (on average about 3,5 kg), but also to the placenta (about 650 grams), amniotic fluid (about 1 kg), enlargement of the uterus (about 1 kg) and retained fluids (2-3 kg).

Those who have sex with children in bed ❯