Gastroesophageal reflux in the newborn: symptoms and treatment 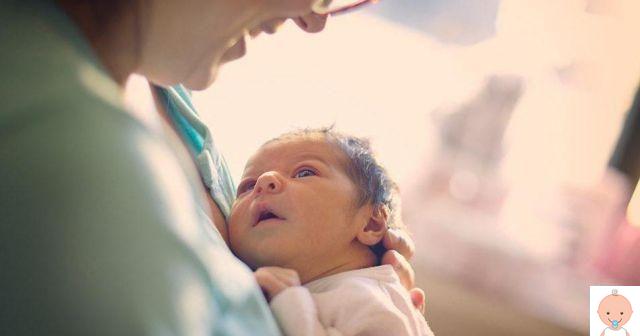 One of the most annoying ailments of very young children is gastroesophageal reflux, which is one of the most frequent causes of going to the pediatrician. Yes, because mothers often get caught up in the anxiety caused by this problem. The good news is that, in most cases, the infant's gastroesophageal reflux tends to go away on its own within a few months, even if it is right to diagnose it in order to try to counter it in some way.

It must be said immediately, however, that the simple regurgitation of babies, typical of almost all children, is different from reflux: the small amount of milk emitted from the mouth after feeding or burping is quite another thing from gastroesophageal reflux itself. Let's see why and what needs to be done.

What is Newborn Gastroesophageal Reflux

Reflux is the rise of gastric contents into the esophagus, caused by relaxation or a malfunction of the cardia, the small valve that separates the stomach from the esophagus. When you contract, the cardia retains food in the stomach.

The disorder affects especially at a very young age: it is very frequent in fact up to 10-12 months of life because the mechanisms that control digestion are still immature. According to epidemiological estimates, about half of all newborns suffer from it. Generally, this is a transitory problem, destined to be resolved in a short time, usually within the third month. But this is not the case for everyone and cases can be more or less serious.

The first triggering cause of gastroesophageal reflux in the newborn is the imperfect functioning of the cardia. Among the other factors that can cause it and the disorder there are incorrect positions during breastfeeding or bottle feeding, moments of stress (because even newborns get stressed, for example when they are very tired), inflammatory visceral states, situations more complex and less frequent such as organ malformations or abdominal diseases.

Symptoms of Gastroesophageal Reflux in the Newborn

The main symptom of reflux in young children is regurgitation, although it does not occur in all: milk (or food, if we are talking about older children) can go up into the esophagus, but not necessarily come out of the mouth. In other cases, however, there may be vomiting. Regurgitation occurs after each meal, in repeated small puffs, and is usually accentuated if the baby has eaten a lot or is lying down. Sometimes there is also hiccups.

There may also be other symptoms not related to the gastrointestinal system:

When reflux becomes a disease

As we said above, in general, the gastroesophageal reflux of the newborn should not worry because it is a temporary and non-pathological phase in the life of a newborn baby. This is different if the symptoms become important. Reflux should be considered a disease if:

If the infant's gastroesophageal reflux is particularly serious, there may be some symptoms that require immediate consultation with the pediatrician: traces of blood in the vomit, very dark stools, anemia. In this case, more in-depth medical examinations will be prescribed.


Diagnosis of Gastroesophageal Reflux in the Newborn

In the simplest and non-pathological cases (i.e. those with normal regurgitation) no particular tests are performed: the pediatrician will make the diagnosis, based on the symptoms reported by mom and dad. On the other hand, when gastroesophageal reflux disease is suspected, an x-ray of the esophageal transit and pHmetry are prescribed, which is an examination that is used to record and evaluate reflux episodes in 24 hours.

In cases where there is esophagitis and the picture is more complex, esophagogastric endoscopy, scintigraphy and ultrasound are performed. But we emphasize that they are not routine tests, but only if the symptoms are very important.

Treatment of gastroesophageal reflux in the newborn

Treatment depends on the extent of the disorder. If the symptoms are limited to regurgitation there are no specific therapies, also because it is a passing phenomenon that tends to pass on its own. But here are some tips:

Medicines should be administered only and exclusively in the most serious cases and always under very close medical surveillance. If vomiting is frequent, prokinetic products are used which accelerate gastric emptying, and antacids if there is esophagitis.

Gastroesophageal reflux of the newborn and osteopathy

Osteopath manipulations are a gentle and natural approach to the problem of reflux in infants. In recent years, more and more mothers have turned to this specialist to treat various ailments of the little ones, including reflux. If you want to know more you can read HERE.

Gastroesophageal reflux in pregnancy, how to treat it ❯

add a comment of Gastroesophageal reflux in the newborn: symptoms and treatment