Gender of the child: reveals itself with a party 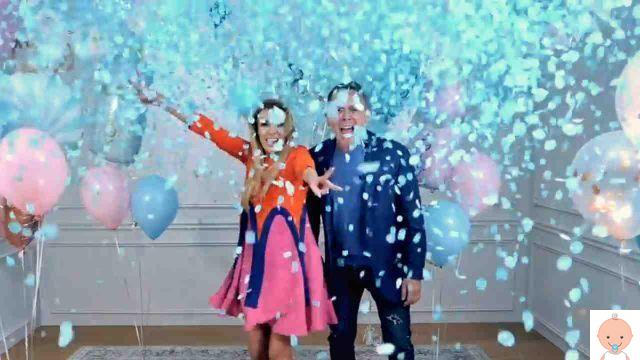 We didn't have time to absorb the all-American fashion of Baby Shower (Read), the party to celebrate the arrival of the baby with many gifts for the mother and the unborn child and the cakes of diapers (WATCH), which comes a new custom to be copied.


LOOK AT THE PICTURES: Boy or girl?


We are not talking about the "fetus party " (Read), a party where the most spectacular ultrasound scans are the absolute protagonists, but of the "Gender Reveal party".

A special occasion to announce to all friends and family what the baby's gender is.
To provide the details of this new custom is Time magazine: now the sex of the baby can be revealed in the second trimester with the structural ultrasound (Read) or with amniocentesis and very few couples decide they don't want to know about sex until birth.

Male or female?
Once you have received the news, how to communicate it to friends and relatives? Once the chain SMS is passed, a phone call impossible to all concerned, someone sends an email with the ultrasound attached (Read) that reveals the secret, but for those who really want to amaze (and have fun) the gender party is a truly unique solution.


READ THE PHOTO STORY: WILL IT BE MALE OR FEMALE? 12 WAYS TO DISCOVER IT


How organize it? You can set up a real team game, the pink team and the blue team that with riddles, cards and simple games will compete to guess the sex.
The solution (perhaps the revealing ultrasound or a gynecologist's report) will be contained in a sealed envelope that will be delivered to the winning team. Small pink or blue objects as a prize.

For the refreshment you can indulge yourself according to your cooking skills and the time available: muffins covered with pink or blue icing, colored sweets and finally a cake decorated that definitively reveals whether a boy or a girl is coming. And don't forget the decorations: colorful and fun.


ALSO READ: BABY SHOWER, HOW TO ORGANIZE A BIRTH PARTY IN the country


But the gender party can be one surprise also for parents. You can ask the doctor to close the response in a sealed envelope that can be delivered directly to the pastry chef who will prepare the cake based on the baby's sex.
In this way, even parents will be able to experience the anticipation and suspense in the company of friends and toast all together when the verdict is revealed.

Sex: positions to get pregnant right away ❯

add a comment of Gender of the child: reveals itself with a party