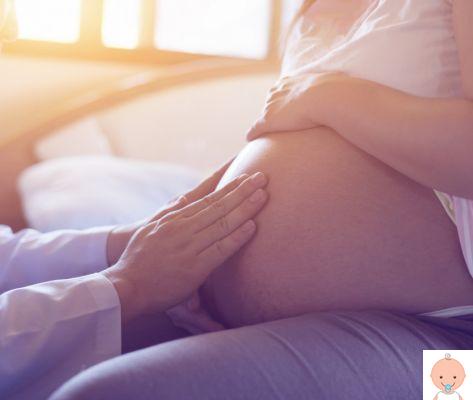 Il gestational pemphigoid (o herpes gestationis) is a pathology of the skin which can occur in the second or third trimester of pregnancy or even in the immediate post-partum period. It is a very annoying disorder, which affects one in 10.000 women, characterized by itching and erythema that can recur in subsequent pregnancies. Let's see what the causes and symptoms of gestational pemphigoid and how to intervene.

What is gestational pemphigoid

It's a skin disease which appears during pregnancy or after childbirth and is characterized by erythema very annoying. The disease can be easily confused, at least at the beginning, as dermatitis and skin diseases related to hormonal changes typical of pregnancy and to have a diagnosis sure you do one biopsy skin cutaneous with direct immunofluorescence test to search for abnormal antibodies. Specific tests such as non-stress tests, ultrasound or electronic fetal monitoring can be performed to assess the health of the fetus child.


In 25% of cases the disease can I will relapse in subsequent pregnancies or following the use of oral contraceptives.

Gestational pemphigoid is considered one autoimmune pathology probably caused by anomalies antibodies which attack the body's tissues and cause a relatively rare autoimmune reaction. In some cases, thyroid dysfunction can increase the risk of suffering from gestational pephigoid.


Although it is commonly called gestational herpes and if the rash resembles the blister rash caused by herpes simplex virus infection, this disorder is not viral, but autoimmune in origin.

How does gestational pemphigoid present? Onset is almost always sudden, with a higher incidence in the last months of pregnancy or even after delivery. These main ones symptoms:

The hallmarks of the disease are:

The rash is extremely itchy and very visible: flat or raised red spots appear initially in the abdomen area around the navel and then spread peon blisters of liquid, different in size and irregular in shape and filled with fluid.

The confirmation that it is precisely gestational pemphigoid occurs either through a clinical evaluation by the dermatologist or with a direct immunofluorescence of the periwound skin, which is able to highlight the presence of linear deposits of C3 in the area of ​​the basement membrane of the epidermis, caused by the activation of complement in response to autoantibodies.

After the diagnosis has ascertained that it is gestational pemphigoid, the therapy basically consists in the use of corticosteroids systemic such as prednisone orally. In case of mild disease, they may be sufficient topical corticosteroids (creams to be applied directly on the affected areas) ed antihistamines.

In most cases, gestational pemphigoid worsens during labor or late pregnancy, but then disappears spontaneously over the weeks.

If the disorder occurs after delivery or persists in severe form after birth, alternatives such as azathioprine, methotrexate, dapsone, cyclosporine, intravenous immunoglobulin (IVIG) may be considered.

Risks to the fetus

10% of newborns can be affected by minor hives or vesicular lesions, due to the passage of autoantibodies through the placenta, which last a few days after birth and then disappear spontaneously. There was also a higher incidence of premature births with 16% of babies born before 36 weeks and 32% born before 38 weeks. However, no increase in fetal mortality was noted.

add a comment of Gestational pemphigoid, symptoms and remedies