Getting pregnant at 40, all you need to know 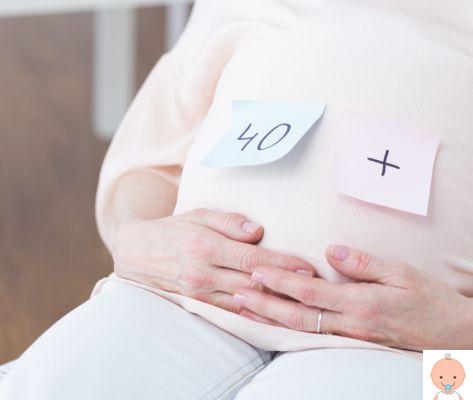 How to get pregnant at 40

There are so many stories of women they discover expecting a child at 40 years old. Although according to statistics, the chances of getting pregnant are much higher for a woman of 30, the biological clock is not always right. Certainly, however, being pregnant at this age, often of the first child, can give rise to some fears, make mother and baby more vulnerable.

Read also: The dumbest things people say if you get pregnant at 40

In this article we want to talk about pros and cons of becoming a mom at 40, even through the stories of some women.

Pregnant at 40, pros and cons

There is the joy of discovering that you are expecting a baby and this joy is ageless. Sometimes it does not happen by chance, but it is a desired desire, sought, also through care and, perhaps, the joy is even greater when you discover that that little green bean is growing inside itself. But what are the advantages and disadvantages (which we will more appropriately call "risks") of becoming pregnant at this age?

Starting from pros of becoming a mom at 40, we put in the forefront the maturity of the woman who will have, over the years, matured patience and responsibility, fundamental characteristics to be maintained when raising a child. Probably there will also be a stable job, a career built over time and, therefore, economic security and personal satisfaction that are undoubtedly beneficial.

Il get pregnant at 40 years oldUnfortunately, however, it increases the cases of malformations and complications in the child, the body is less young and, therefore, subject to health problems in pregnancy, such as increased blood pressure and diabetes. And, it should also be emphasized, that a 40-year-old mother usually has less energy in raising children, sometimes even less pulse in their upbringing.

But it would be a mistake to make a shit out of everything, since, undoubtedly, a lot depends on the character, on the story of each woman.

As the Ministry of Health also reports on the official website, age plays a fundamental role in reproductive capacity of the woman. The female so-called "fertile window" is limited and, with advancing age, the quality of the oocytes decreases. Every woman, in fact, is born with a predetermined number of follicles, which over time is reduced, until they run out without the possibility of regeneration. A woman's fertility is highest between the ages of 20 and 30, then undergoes a significant decline around the age of 32 and a second faster decline after the age of 37, until it is close to zero in the years preceding menopause, which generally occurs. occurs around the age of 50.

We start talking about subfertility or infertility around the age of 40, sometimes even earlier. Furthermore, with increasing age, in addition to decreasing fertility, the ability of the endometrium to interact with the embryo is reduced and cases of endometriosis and fibroids increase. The increase in the age at which a woman becomes pregnant often causes a lower chance of carrying a pregnancy to term (spontaneous abortions and intrauterine fetal deaths, ectopic pregnancies, preterm births and genetic diseases such as trisomy 21).

How to preserve fertility

While the biological clock plays its role, healthy habits can help preserve fertility, even after the age of 37 and around 40. Avoid smoking and alcohol, do not lead an unregulated life, follow a healthy diet, do not overdo the intake of coffee, do physical activity are small but important tips to ward off infertility . It is also essential to undergo constant checks to learn more about your situation and, if necessary, take supplements or drugs.

How to increase fertility

We said before, female follicles do not regenerate and, as we age, they decrease, also reducing the chances of getting pregnant. In addition to preserving fertility with the aforementioned tips, fertility can be increased, for example, keeping possible infections under control, avoiding overweight, not postponing checks to the gynecologist.

How to increase ovulation naturally

Looking for a child at 40, as anticipated, is more complicated - often - than at 30. E ovulation is one of the main obstacles. Beyond a certain age, women often need to stimulate and increase ovulation, under the advice of the gynecologist, through supplements but also many natural remedies. Following a healthy lifestyle, with a balanced diet, keeping weight under control, playing sports, can in fact help stimulate ovulation.

Speaking of supplyin particular, the intake of some vitamins helps to regulate ovulation. This is vitamin B 12 which we find in salmon, beef, lamb, eggs, milk, yogurt and also in clams and oysters; vitamin C, found mainly in citrus fruits; Omega 2 which would lead to an increase in blood flow to the uterus and regulate ovulation hormones. Omega 3 is contained in oily fish and dried fruits such as walnuts and almonds. In general, it is a good habit to follow a healthy and varied diet. The vitamins mentioned above can also be taken in the form of supplements, but you should never start taking them without consulting your gynecologist. They can contribute to the increase of ovulation in a natural way, a regular daily rhythm, constant physical activity.

How long does it take to get pregnant

Question that many women ask themselves, but to which it is not possible to give the same answer. In addition to age, in fact, there are many factors that can affect conception. According to some statistics, however, we can say that about 84% of women become pregnant after one year, 92% after two years. The time is significantly shorter for young women, with the likelihood of getting pregnant between 1 and 6 months. By dividing women by age group, we say that those between 20 and 30 usually get pregnant in 4-5 months. Women between 30 and 35 in 7-12 months, over 35 in one year or more.

We also see it in the world of entertainment and cinema: more and more women become pregnant in old age, have beautiful pregnancies and are wonderful mothers. Let's start with one of the new vip mothers over 40, Eleonora Daniele, the presenter has in fact recently become the mother, for the first time, of his Carlotta at the age of 43. There are also those who like Alena Seredova, has recently welcomed his third daughter Viviene Charlotte: hers is a pregnancy that came after many years from the first two, an experience that the showgirl has lived even more emotionally. Even some of the most beautiful women in the world have welcomed their child over 40, from Julianne Moore to Mariah Carrey, from Susan Sarandon to Nicole Kidman. And, returning to the country, mothers over 40 are Emanuela Folliero, Monica Bellucci, Antonella Clerici, Laura Freddi, Carmen Russo. To tell the experience of her 40-year-old mother, also the writer Enrica Tesio who, among other things, lived her pregnancy in full quarantine. The writer talked about her pregnancy at 41 like that at 21 in some ways, with terrified grandparents, friends who tell you "poretta" and other situations bordering on absurdity. The writer also talks about the necessary tests to do if she becomes pregnant at this age and which, says Tesio ironically, only reiterates "how old you are".

Pregnancy at 40 what tests to do

Yes, pregnancy at 40 often requires more attention, as well as checks and specialist visits. In addition to routine blood tests in every pregnancy, expectant mothers in their 40s may be asked (or recommended) by the gynecologist screening tests to monitor the health of the fetus and avoid the presence of malformations and other complications. For this reason, women often undergo amniocentesis, CVS, fetal DNA tests or other tests. Especially if something abnormal is suspected.

The one who has reached the age of 40 can also be the second, as well as the third or fourth pregnancy. The emotion for every mother is always the same. Sometimes the other children are already grown up and, then, they can be a help in the growth of the unborn child. Living a pregnancy at 40, with other children is undoubtedly a demanding experience, which can be frightening, but which brings a breath of joy to the whole family, empowering the older siblings.

Pregnancy at 40, complications for the mother

In concrete terms, what are the risks of a pregnancy lived at 40 years or over for the mother? The not very young biological age to welcome a child can cause problems in the mother such as gestational diabetes, placenta previa, post-partum haemorrhage, preeclampsia. Always keeping the woman under control during the months of waiting is essential to reduce these dangers.

Complications for the baby

The risks for a child conceived at a late age are manifold. The first, unfortunately frequent, is themiscarriage after a few weeks of pregnancy (a phenomenon that according to some studies affects 40% of 40-year-old women). The second risk is that of chromosomal abnormalities, from down syndrome to other genetic malformations. When something strange is revealed by ultrasound scans, women are often subjected to more in-depth screening tests, from the fairly common bi-test, to the fetal DNA test, up to - when necessary - fetal magnetic resonance and other second level examinations. . All specific tests that allow you to photograph the condition of the fetus, the complications, its health, the possibility of carrying the pregnancy to term.

A pregnancy between the ages of 35 and 40 involves, at times, too complications at the time of delivery: cases of premature birth, reduced fetal growth, placental abruption are common. Giving birth at 40 does not mean, however, certainly living one of these experiences - which obviously can also affect younger women - childbirth can be idyllic, perfect, as well as a peaceful pregnancy, much better than the previous ones (for mothers who I'm not the first child). And the caesarean section? Sometimes it is recommended, but we emphasize that in the absence of particular dangers and complications, many women give birth with a natural birth even at 40 years of age.
Getting pregnant with a retroverted uterus: risks and consequences ❯

add a comment of Getting pregnant at 40, all you need to know