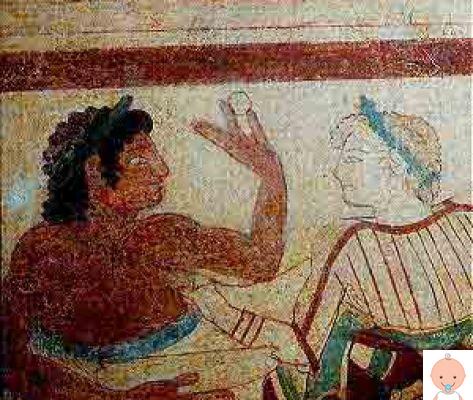 When we are looking for a pregnancy, every topic or news meets our interest.

iLa fertility and fertility they represent the power of the feminine and hide a complex symbolism that refers to the female body, to the reproduction and pregnancy. Here's how to recognize the symbols that surround us. Using them is certainly propitious in the quest for pregnancy


Even if many contest the psychoanalytic tendency to find the symbol of the everywhere fertility, because they consider it something reductive of the female experience, fertility is the power of the female enclosed in the seeds, creativity and sexuality that leads to reproduction (READ). Let's see then what are the many symbols that have been used for since the most remote times to represent the feminine in all its creative power, through art, literature and religion. An excursus through the symbolism to make the representations of fertility our own in order to always carry with us something that alludes to power to generate life.
If you are looking pregnancy, if you are pregnant or if you are already a mother, or even if you do not think about it yet, but you are intrigued by the magic and complexity of a female body, read here to have even more awareness, or to choose your own lucky charm area of fertility. In fact, many of these symbols can be easily reproduced in images to hang in the bedroom, jewelry to wear, etc.


READ ALSO: Fertility and biological clock: how much do you know?

FISH: it has deep ancient pagan roots, antecedent to Christianity. In pagan creeds Ichthys was the son of the ancient goddess Atargatis. This word also means "uterus" and "dolphin" in certain languages, and representations of this appeared as a depiction of sirens. The fish is also a central element in other stories, including the goddess of Ephesus, such as the story of the Nile fish swallowing a part of Osiris's body (the penis). The fish was also considered the symbol of the sexuality of Isis who had sexual relations with Osiris after her death from which a son was born, Harpocrates, Therefore, in pagan beliefs, the fish was a symbol of birth and fertility (Read)


WATCH THE NEWS AND PHOTOS ABOUT FERTILITY

GOBLET: or the cup, or any instrument capable of "containing", can represent the womb (even a simple triangle with the tip down, which also recalls the female pubis), on the other hand any pointed instrument such as the sword and the knife, and the triangle with the vertex up, are conventionally phallic symbols which recall the male universe (war and hunting, with weapons, were male tasks) and male fertility, the erect penis. In some cultures, the plow also had this symbolic signifier, as it digs into the earth (penetration). Even the thumbs up (our "ok") was originally a phallic symbol according to some sources.

HEART: symbol of love, both sacred and profane, beneficial and magical

SHIP: symbol of travel, departure; it can also be an emblem of wedding and family, in which the ship's passengers indicate family members

PINK: symbolizes love, in the broadest sense of the term, together with the buds it can also indicate a mother with her children

APPLE: is a symbol of love and fertility

LOTTO: for the Chinese it represents one of the 4 seasons, it is a symbol of fertility e "vita" and is assumed by Buddhism among the "eight treasures", as well as being represented in one of the Buddhist positions of meditation

POMEGRANATE: in China it traditionally symbolizes fertility (due to the numerous grains it contains) and specifically the birth of many male childrenthe; however, it is also a very ancient Iranian and Middle Eastern symbol and is everywhere associated with female fertility

SWASTIC: before being abused by the Nazis, it included the life and fertility: Fertility goddesses found in tombs have this symbol on their throat and chest. As we read on Focus it is a very ancient and widespread symbol and with slight variations in shape, from Mongolia to China, to Central America, to the Mediterranean basin (Susa, Crete, Troy, Cyprus represented the sun that rotates in the sky, bearing a wish of fertility and well-being.


HARE (LOOKS): for his fertility, his fast and are famous pregnancy profiles. In fact it is a symbol of spring and new births. It is also found in the Christian / commercial Easter

EGG: (WATCH) among many ancient peoples, the egg was considered a symbol of life, fertility (READ) and perfection. We also find it represented in Etruscan paintings of Tarquinia. In the Tomb of the Lionesses, from the 1870th century BC a man holds an egg in his right hand and a cup in his left, like a character from the Tomb of the Leopards, from the first half of the 340th century BC. Eggs also appear in the Tombs of the Shields, the great hypogeum discovered in XNUMX and datable to about XNUMX BC, and of the Frontoncino, from the XNUMXth century BC where a man holds an egg in his right hand and a crown in his left. In a polychrome oinochoe found near Cerveteri, a scene with a long procession of warriors and a mother and child walking towards a female figure holding out an egg is engraved

WATER: among the various symbols of fertility, what perhaps more than any other represents it is the element of water. Every living form is born from water: without it, life could not exist. It is the element that has always been linked to man as a universal symbol of fertility. Since ancient times it has represented femininity, with its characteristics of sensuality and motherhood, a symbol of creative and regenerating power.

READ ALSO: Can I have children? All about male fertility and infertility


BELLS: in medieval times it was thought that they had a soul and that autonomously acted to announce joyful events or terrible misfortunes, for this reason, before being placed on the bell towers or in the place intended for them, they were blessed and dedicated to a saint. The ceremony was similar to a baptism and each bell had a godmother or godfather. Even today on many ancient bells it is possible to read inscriptions placed with the aim of averting catastrophes and propitiating crops. Even in the South there was the belief that the sound of the bell would have been more harmonious and Argentine if the blood of a virgin had been added to the melting of the metal. Another meaning of the bells is the fertility (READ) (always linked to the spring season): bell and clapper symbolize, due to their shape, the reproductive organs

Here is a list of fertility symbols. Using them is certainly propitious in the quest for pregnancy

Anti-nausea remedies: ginger in all its forms ❯

Gynecological examination: how it takes place and what changes during pregnancy

Madonna: identikit of an iron mother

Getting pregnant at 40, all you need to know

The most beautiful tattoos of moms

add a comment of Getting pregnant: the propitiatory symbols of fertility