Gingivitis in pregnancy. What to do and how to prevent it 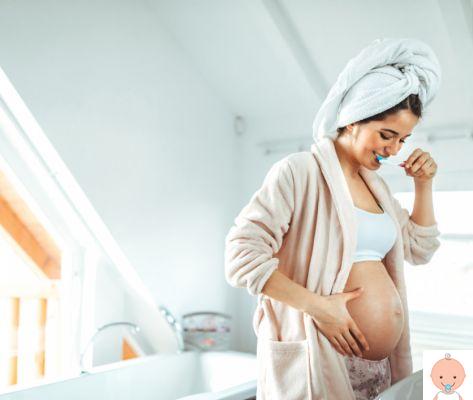 Gingivitis in pregnancy. What to do?

A dentist appointment probably isn't high on the list of pregnant women 's priorities, yet it should because hormonal changes that occur during the nine months can damage oral health and increase the risk of gum inflammation. What to do for the gingivitis in pregnancy and how can it be prevented?

La gingivitis it is an inflammation of the gingival tissues caused mainly by the accumulation of plaque and the formation of tartar.

The bacteria normally present inside the mouth can proliferate in some circumstances, such as poor oral hygiene, but also in the case of diabetes, smoking or, indeed, pregnancy, and favor gum inflammation.

I gingivitis symptoms They include:

Why are we more prone to gum inflammation during pregnancy?

One of the main causes of the increased risk of gingivitis gravidarum is related to hormonal changes occurring during this period: gingival inflammation most commonly occurs between the second and the first month of pregnancy, and the risk increases especially in the third trimester.

To promote the risk of gum inflammation during pregnancy is lincreased levels of progesterone which makes the teeth more susceptible to the development of bacterial plaque.

Progesterone is a fundamental hormone from the early stages of pregnancy: it serves to ensure the correct nesting of the fertilized egg and then to make the fetus grow and develop. Precisely progesterone increases the amount of blood that flows into the gingival causing, therefore, hypersensitivity and also a greater risk of inflammation.

How to deflate gums in pregnancy

Among the most used grandmother's remedies there are certainly compresses with warm water and chamomile, but also gargling with salt which can be effective in defusing inflamed gums.

Read also: How to prevent tooth and gum disease

What to do for gingivitis?

In case of gingivitis, the dentist, in agreement with the gynecologist, may prescribe oral therapy with antibiotics and mouthwashes, such as Meridol, which perform an antibacterial action, help reduce swelling and inflammation.

The use of mouthwash it is also useful in case of mild gingival inflammation.

If left untreated, gingivitis can escalate into one periodontitis, a more advanced stage of gum disease that can spread to the bone. Periodontitis can increase the risk of preterm birth or low birth weight and promote sac formation in the gums and tooth loss.

Oral hygiene advice. What to do to prevent?

Finally, it is essential to program one visit to the dentist in the second or third trimester to evaluate the condition of the gums. At the same time it is very important to take care of oral hygiene and protect teeth and gums.

add a comment of Gingivitis in pregnancy. What to do and how to prevent it