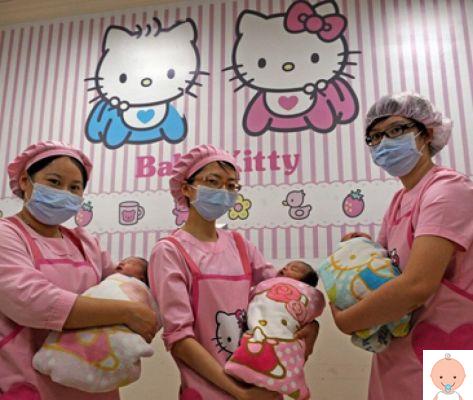 A few years ago a documentary went around the world and moved millions of people. He was called "The first breath"and told through images the many ways in which one is born in the world. Twenty-two months of filming to take a trip around the world to discover the ancestral traditions in matter of birth.

Ma how you are born in various parts of the world? I was reading that in China la pregnancy it is seen more or less as a disease and that about five thousand women a year they decide to pay good money and rely on a specialized agency to give birth to their children in the United States and escape the one-child law.

If we look at the Japaninstead, we must forget the noisy neonatal wards of our hospitals, where new mothers, relatives and babies coexist noisily in the same confined space and remember that the Japanese give great importance to "personal space". So, even if the pregnant woman is hospitalized in a room with several beds, silence will reign and no one will give anything to talk or chat so as not to disturb others. Furthermore, in Japan there is little use of painkillers and you stay in the hospital for a very long time: 5 days for a vaginal birth and even 10 for a caesarean section.
And in Taiwan in 2006 a hospital was born entirely dedicated to Hello Kitty, the kitten that anyone with a daughter finds on backpacks, saucers and t-shirts. In this hospital, everything is signed Hello Kitty, from the nurses' coats to the cots, to the wallpapers.

Turning our gaze to Europe we discover, but not surprisingly, that in

most pregnant women don't have a

, but a midwife who follows the woman throughout her pregnancy. The doctor intervenes only in case of complications and high-risk pregnancy. In addition, more than half of women choose to give birth at home.

Even in India, people give birth at home, especially in rural areas, but the Ministry has launched a campaign to discourage this habit and encourage women to go to hospital. The goal was to reduce childbirth mortality, but the data reveal that no improvement has occurred in this regard. Probably because the obstetrics wards are old and dangerous.

. In the town of Quidbo, the hospital of

Even in Turkey extensive use is made of caesarean sections. The percentage is even close to 75% in private clinics. Furthermore, the caesarean is generally performed under general and not local anesthesia.

And in el country? In our country almost 40% of cases have recourse to caesarean section, epidural is not a guarantee for everyone and this certainly affects the incidence of caesarean section. The new guidelines on the birth path of the Ministry of Health promote a pregnancy and a birth as natural as possible.

And if in our country the epidural remains a mirage, in other countries it is a drug like any other that is offered to pregnant women without much drama: in the Kuala Lumpur hospital, in Malaysia, for example, everything takes place in maximum efficiency and when the time comes to be able to have an epidural, the doctor nonchalantly asks the pregnant woman: "Do you want an epidural?".

But regardless of whether you are born with a

natural birth or with a caesarean,

there are a myriad of curious traditions and legends around the world surrounding pregnancy and the arrival of a baby. Here are a few.

A Malta Tradition has it that if it rains a lot during the wedding, the woman will have a quick and not very painful birth. For this reason, couples often choose to get married on days with a high risk of rain.
in Orkney Islands, off Scotland, it is said that if there is a rainbow in the sky, a child is about to be born there, near the area where the rainbow ends.

In United States the tradition of baby showea: a party in honor of the baby who is arriving that is organized before the birth. Friends bring gifts for the baby and celebrate in preparation for the birth. Instead in Turkey the party takes place after birth: typical drinks are drunk and flour is sprinkled on the baby's forehead and eyebrows as a propitiatory symbol of a long life.
In Horn of Africa, in Congo and Chad, the arrival of a child is always a source of joy, for the mother and for the community. Having many children means, for the woman, earning the respect of the rest of the village. Women often live too far from the medical centers set up by NGOs and experience their pregnancy in their own hut. When they feel the moment of birth approaching, they set out on foot to reach the birth points. But they often don't arrive on time and give birth along the way. Tradition has it that women give birth seated and that the child touches Mother Earth as soon as it is born, as a blessing for the life to come.

add a comment of Giving birth: traditions and curiosities from the world