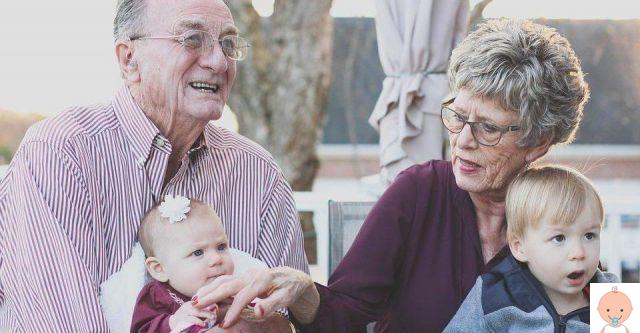 The approach is approaching 2 October and with this date the fthis of the grandparents, established at the level national in 2005 for "to celebrate the importance of role played by grandparents inside the families and company in general". There force of this role in construction of days happy is as much as I am fascinates thinking about what in a future not too much away, at least I hope, I'll be too: one Great nonna.

these tireless parents just don't have endured Our moods, fevers, the changes area of company and rebellions generational, but continue to give solidity al blood Of their blood without ever to expect anything in cultural, .

So it seems to me due, funny especially for most small, create for the party of the grandparents of objects unique with which to say thank you for their constant presence. Indeed, it is estimated that i grandparents I'm great resource not only emotionally but also from the point of view economic. They argue or help support i children with their respective families (transfers of money, shopping di beni necessary, etc) and perform with love un work which otherwise it should be paid: do i Babysitter.

Il minimum, hence, it is that of to honor their figure and with a party national. After all, although with data different, it is one recurrence by character international who finds hers roots negli United States already in 1978, in the ideas of a super nonna - Marian McQuade - for whom the relationship grandfather-grandson it was fundamental to the purpose educational of young people generations.


- recycled items then they are Cool: With tablespoons di plastic, buttons e cockades can be achieved spille, Bookmarks, puppets. Vases "Coated" ad hoc or objects in ceramic (cup and the like) can be enriched da photo and, if the time available is really little, choosing of president or other elements in fabric, the child can stamp la cloth also with i piedi! You will see: yes will amuse a world and will make happy its grandparents.

La date of 2 October coincides, according to the Church catholic, with the memory liturgical of the guardian angels and who, better than grandparents, can he aspire a tale role? But beyond the coincidences temporal and the realization of a recognition official, in the "vita" of everyone, even in my life, i grandparents they did and do the difference. The flower official for the party of the grandparents and the nontiscordardimé. These short lines are a invitation not to may.

"You will be" and the song area of party of the grandparents (music e text by Walter and Andrea Bassani). Listen to it by clicking HERE. There it is we suggest!

I references regulations of the Party of the grandparents are available for consultation online WHO.

Father's day, here are some ideas for a super gift ❯

add a comment of Grandparents' day, creative jobs for a super gift