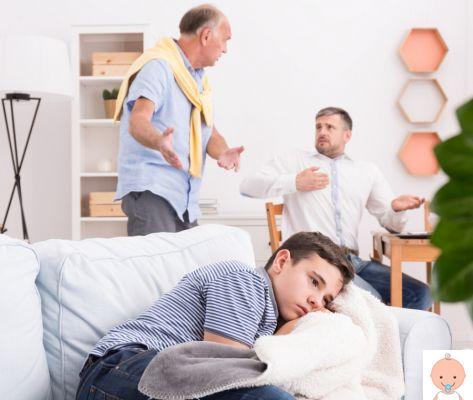 When a child is born, the balance of the entire family is demolished to create new ones: a man becomes a father, a woman becomes a mother and even the parents of these women and men are catapulted into the role of grandparents. The way to react to this generational turnaround he can say a lot about our character, our past history, our way of living life.


However, there is no better way to react than another: every way reflects one's own path of life and for this reason it must be understood and respected. When one becomes a parent, the conviction often arises that the new grandparents will do everything possible and even beyond to help the new family that has been formed. Sometimes it happens to create very high expectations regarding this aspect. Expectations which, however, are disappointed over time. There are omnipresent grandparents and absent grandparents, grandparents who do little and grandparents who do a lot, grandparents who rejoice in spending time with their grandchildren and others who, on the other hand, just can't live this being together in a joyful way and can't be with their grandchildren.

As previously said, none of these reactions is better than the other, but they all speak of the person who at that moment finds himself in that role and what he does, says and how he behaves must be respected and absolutely not pointed out with negative judgment.

Read also: How to be a good grandparent

Grandparents who can't or don't want to be grandparents

It often happens that the idea that one has of the figure of the grandfather changes from person to person and that son who has just become a father expects his parents to become his ideal of grandfather and grandmother. This is deeply wrong because each individual has their own way of reacting to events and we cannot impose our way of living a role on anyone. If grandparents are unable or unwilling to play this role, we must certainly not blame them for this, but we must respect them and try to accept this condition of their life. And then decide how to proceed: for example, we can accept this situation without complaining about how they live their role and slowly move mentally away from our ideal of grandfather that does not correspond to reality. Or spend our entire existence blaming them by causing anger, quarrels and misunderstandings.


The choice is up to us: do you want to direct your vital energies? Our grandfather ideal reveals the relationship we have with our parents. When we expect a person to do certain things, there are two reasons: either because we know him so well that we know his steps in advance or because we have the desire to see him different and therefore we create illusions. In the first case, understanding reigns, in the second unresolved conflicts that have persisted over time for who knows how long.

So if we often find ourselves complaining about our children's grandparents because they do too much or do too little, perhaps we should ask ourselves what is there to resolve in the relationship that we ourselves have with them.

Often when a situation does not go as we think it should go, we begin to blame, to complain, not to pay attention to the true fulcrum of what is happening. First of all we must come to the belief that not wanting to be grandparents is absolutely not an attack on us, to our being a child, but a way of reacting to a situation. So we don't have to take it personally, we don't have to feel hurt or make it sick. Instead, we need to turn our energies into accepting the situation and finding the healthiest and most constructive way for us to overcome our discontent and move beyond.

We can then try, if we want, to bring them closer to us with patience and without judgment or choose to have a more distant bond: the choice is up to each of us and here too there are no better choices than others. There are only choices that make us feel good.

Grandparents did not choose to become grandparents

For better or worse, those who have a child have chosen him. A grandfather, on the other hand, sees himself catapulted into this role in a moment that perhaps is not good for him or in the absolute best moment for his life. The fact is that he has to deal with this generational leap and his entire internal world is shaken: experiences, memories, emotions ... everything is reactivated and requires elaboration. It is an aspect of the figure of the grandfather that few consider because he is projected more on the new parents and on the newcomer. But even the grandparents in this generational theater have a nice emotional job to do and often they do it in silence, alone, without any consideration.

How to deal with the figure of the grandfather or grandmother?

First of all, we try not to create expectations but to experience what happens moment by moment on this journey of the birth of a new generation. If we have organizational needs such as knowing if grandparents are available and looking after the child while we are at work or similar things it is important to talk to them but not to react badly if their answer is negative or if they make us understand that it is not. they want. We accept the reply and we channel our energies not in lamentation, but to find other solutions, aware of the fact that their negative response is not an attack on our person but their way of reacting to an event in life. A reaction not to be judged since everyone has their own story behind them, their own difficulties to face and overcome, your own path to take. Think of your parents as theater actors, sit back and enjoy the show of what will happen in this role transformation and work on yourself thanks to the emotions that this show will arouse in you!