Growing up without love: when mothers are anaffective 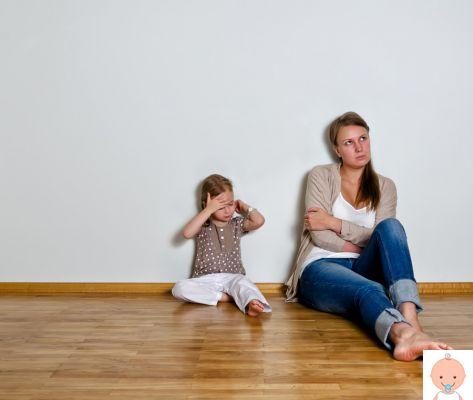 The difficulty of some mothers to express their emotions by making the anaffective relationship and devoid of caresses, it does not allow them to grow hand in hand with their children. Growing up without love it means creating conflicting relationships and grudges that remain unspoken for a lifetime. But who are the unaffective mothers?

Affectivity it is an important component of any relationship. Being able to express oneself freely allows spontaneity to bring out one's character and aspirations both in terms of relationships and life choices. The psychic functions collect the set of negative and positive feelings and emotions that each individual can experience. Or even better the good and bad emotions, Distinguished erroneously into two categories, they serve because they are all functional to the expression of one's being, that is, one could not feel joy if there were no sadness and one would not be able to feel anger if there was no fulfillment or satisfaction. These indispensable aspects nourish everyone's psyche without misunderstandings.

Read also: How to build a healthy relationship between mother and daughter

Sometimes, however, it is difficult to be able to 'tell' oneself because one has not been used to doing it. And this is how lack of affectivity is queen. It is now known that the strong link between mother and daughter it allows the latter to grow confident and able to establish healthy emotional bonds. But when the mother is not able to show love and tenderness, it is easy for growth to be catalyzed by factors of emotional deficiency with serious interpersonal consequences. Growing up without love it means growing up feeling abandoned, unable to recognize oneself as an individual and to be welcomed by others by manifesting one's right to exist.


The absence of love is manifestation of coldness and insecurity in relationships inter-individual and couple. But not only. It means running into possible neurosis temperaments and antisocial behavior. Such feelings can be compensated differently through disparate attentions such as satisfaction of material needs (gifts, clothes, money) which aim to make up for and "soothe" an unbearable sense of guilt, an underlying inability to express oneself otherwise. That is how the lack of affect is “compensated for"From everything that can instead respond to the real needs of listening, empathy, caresses and closeness that, on the contrary, a daughter can seek from her mother.

Education is the main cause of this malaise but very often the reasons are of another kind. In fact, an untreated postpartum depression, a rejection of pregnancy and the child, a violence suffered which resulted in gestation, a personality or mood disorder they can result in a dysfunctional relationship. A child spares love, she lives in search of something that can satisfy her sense of emptiness and that is why she is "satisfied" with what the other can give also in material terms. However, she understands that affection is transmitted in this way and hers becomes her way of loving her.

Read also: I am jealous of my daughter!

There is no fault. Everyone has a personal story, a life. It is certain that any relationship can be recovered by starting to communicate "differently" and by being supported by an expert who can work to "heal a sick heart". When you acquire awareness a part of oneself, which until then had not known each other, emerges and any relationship begins to change taking on new appearances: unspoken words, repressed feelings and emotions, arid experiences become an opportunity to make up for lost time. Thus we realize that we have wasted an opportunity, the opportunity to be accomplices, sisters, friends and mothers. Mothers present, human mothers capable of giving advice, suggestions and comparing themselves with others, thus reconciling with themselves and with the world in a healthier and truer way.

Raising a daughter costs more than raising a son ❯

add a comment of Growing up without love: when mothers are anaffective