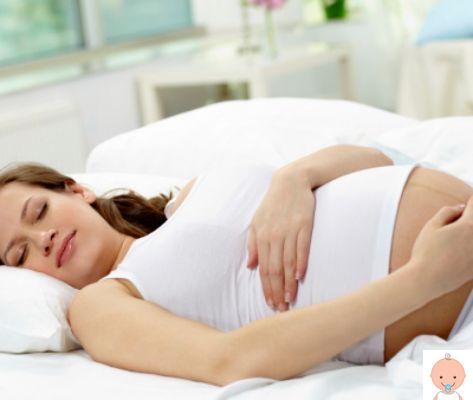 it is a disease of origin

* which mainly affects the

. The consequence is a reduction (until cessation) in the production of thyroid hormones, and therefore to an induced hypothyroidism. What to do in case of pregnancy if the disease is already underway, or if we discover that we suffer from it during the nine months?

Symptoms are more or less the same as in

from an insufficient production of

which regulate some functions of the organism. Thyroid imbalances can be very varied, and often not all of them are present. Let's see what are the alarm signals of a presence of

- Menstrual irregularities, polymenorrhea (more than one menstrual flow per month)

- The reason why this pathology occurs is unknown, but it is known that some conditions, such as pregnancy and

, they can favor its appearance.

Thyroid, can cause problems after childbirth

During the nine months of gestation the woman's need for thyroid hormones increases, because it must also satisfy those of the fetus she carries in her womb. Therefore, Hashimoto's thyroiditis in pregnancy must be treated in such a way as to guarantee the health of the mother who suffers from it and the fetus.

For those who know they suffer from this pathology

the advice is to consult your own

and perform special blood tests and ultrasounds to analyze the state of the thyroid. Once a month it is advisable to undergo blood tests to assess the status of hormones.

Thyroid: when and why to check it

is diagnosed during pregnancy, it is advisable first of all to recognize the symptoms and then start a therapy in order to guarantee the health of the mother and the baby. For example, failure to take suitable medications before and during pregnancy could lead to a high risk of miscarriage within

For the child no special analyzes or tests are necessary, but the required ultrasound scans must be performed. However, if the fetus turns out to be very small compared to the foreseen measures, (it often happens among those suffering from this pathology), it is necessary to carry out some more ultrasound. If the thyroid values ​​during pregnancy remain good and correct drug therapy is followed, the risks that the baby may have thyroid problems at birth are very few.

* Autoimmune: "It is customary to indicate with the diction autoimmune disease the alteration of the immune system that gives rise to abnormal or autoimmune immune responses, that is, directed against components of one's own (root auto) organism (ie one's own; for example an organ , tissues, etc.) capable of determining a functional or anatomical alteration of the affected area. " (Wikipedia)

Herbal teas during pregnancy. Yes or no? Here are which ones to avoid and which ones are safe ❯

add a comment of Hashimoto's thyroiditis in pregnancy: symptoms, risks and therapy