Hiccups of the fetus 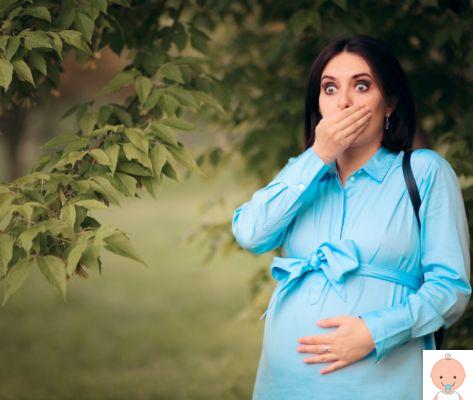 Pregnancy is a time of constant change for both you and your growing baby. Along with all the kicks and blows, you may notice your baby sobbing inside the womb. It is perceived as a jerky movement, different from the rotatory or soccer one. It's normal? Here's what you need to know about baby hiccups in the womb and when to contact your doctor.

Read also: Hiccups in the newborn

Hiccups of the fetus: what is happening

On average, fetal movement can first be felt between weeks 13 and 25. It often starts as small butterfly kicks, or it may feel like bubbles in the belly. After a while, you will feel kicks, rolls and thrusts throughout the day. Have you ever noticed other movements such as rhythmic contractions? These movements may feel more like muscle twitching or other throbbing. But it could be fetal hiccups.

Hiccups of the fetus: the causes

You may start noticing fetal hiccups in the second or third trimester. Many moms start feeling these "jerky movements" in their sixth month of pregnancy. But like fetal movement, everyone starts feeling them at a different time.

Some babies have hiccups several times a day. Others may not have it at all, it is not known what it depends on. This is why they also occur in children and adults. One theory is that fetal hiccups play a role in lung maturation. The good news is that, in most cases, this reflex is normal and just another time in the pregnancy.

It is important to note that fetal hiccups are generally considered a good sign. After the 32nd week, however, it is less common to experience fetal hiccups every day. You may want to contact your doctor if your baby continues to sob every day after this time, with episodes lasting more than 15 minutes, or if your baby has three or more streaks of hiccups in a day.

Hiccups of the fetus: is there to worry?

Hiccups are typically a normal reflex. It has in fact been identified that during hiccups it is mainly the diaphragm (properly only the left part of this muscle group) that is involved, which is stressed to such an extent that the respiratory muscles are stressed more strongly than normal, causing a reduction in intra-intra pressure. -thoracic. In addition to indicating that the baby's respiratory and muscular systems are functioning, hiccups are a signal that the nervous system, which is responsible foractivation of the nerve that controls the diaphragm, is developing correctly.

It has been suggested, however, that if they are frequent and persistent in pregnancy, they could signal a bone marrow problem. Compression or prolapse of the umbilical cord, when the supply of blood and oxygen slows or is cut off by the fetus, typically occurs in the last few weeks of pregnancy or during childbirth.

Complications of cable problems can include:

If there is a sudden change in your baby's hiccups after 28 weeks, for example, if he is stronger or lasts longer than usual, you may want to contact your doctor for peace of mind.

Hiccups of the fetus: how to stop it

As mentioned above, the causes of hiccups are unknown. Several techniques can be tried to stop fetal hiccups. The most common are those that invite you to move, drink water or change the position you have at that moment, so that the child changes activities and thus stops having hiccups.

Read also: Why hiccups come to babies and children
Hiccups in infants: the causes and effective remedies ❯