Hormones: their role in pregnancy 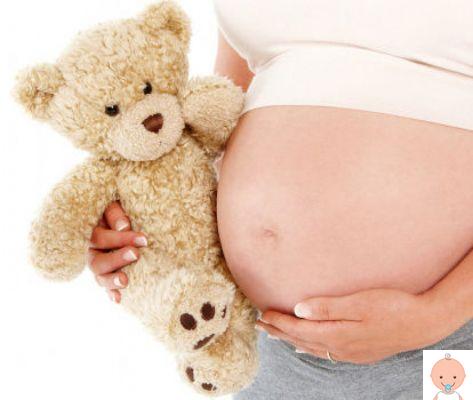 We have always been told that the oddities that characterize a pregnant woman's mood are due to hormones. But what are the hormones really important for pregnancy and what role do they play? Let's try to understand it together. First of all, it is important to know a very important role, especially in early pregnancy, is played by the placenta, the first secretary of key hormones. So we can say that the production organ of all the main hormones of pregnancy is the placenta, no longer the ovaries which in fact are "put to rest" during gestation in order not to incur a new fertilization. And in fact, during pregnancy, the menstrual cycle, managed mainly by ovarian hormones, disappears.

What are the most important hormones in pregnancy?

The first hormone ever is the one that allows us to discover the presence of pregnancy or HCG la human chorionic gonadotropin. This is the hormone that is measured in pregnancy tests in both blood and urine. It usually increases until the end of the first trimester of pregnancy and then decreases and stabilizes. It is produced by a part of the forming placenta and functions somewhat as a regulator of the production of other important hormones.


Another key hormone in pregnancy is oxytocin. The only hormone that is normally produced by the pituitary gland, therefore by the brain, but it seems from recent studies that there is also a production at the level of the placenta.

Il progesterone it is the third important hormone of pregnancy. The peculiarity of this hormone is that it grows very fast in early pregnancy and then slows down growth, and is produced even before the placenta develops from what is called dirty body or that tissue that nourishes and keeps the fertilized egg alive until the placenta has matured to the point of being able to take care of it.

Estrogens are the other family of hormones that, like in the menstrual cycle, are of importance during pregnancy. They have a lower growth than progesterone because they also have the ovary as their production site which, as we have seen, is actually put to rest. So they increase steadily throughout pregnancy but without peaks as is the case with progesterone.

And finally, a hormone that should still be mentioned is relaxin. It is a hormone that is produced very early in pregnancy by the corpus luteum and which plays an important role especially in the first trimester and at the end of pregnancy, while it tends to decrease during the second trimester.


The role of hormones in pregnancy

Now let's move on to analyze one by one what are the actual roles of these hormones during pregnancy, that is, what they are used for and why they are produced. However, it should be remembered that hormones never act alone, but in synergy. That is, you will see that many functions are actually common to multiple hormones. This is because the human body does not function in watertight compartments, but the "integrated communication" of the cells allows the optimal functioning of the whole organism, even more so when it must contribute to the creation and growth of a new life.

Values ​​of hormones in pregnancy (when to worry)

Let's make a small purely medical parenthesis on the analysis of hormone values ​​in pregnancy. It must be said that hormones are not normally measured during pregnancy, that is, tests that tell us the amount of circulating hormone are not prescribed. Also because after the first quarter these values ​​tend to stabilize and it would not make any sense.

Hormones in pregnancy and mood

As we understand the role of hormones in pregnancy is not just that of cause us mood swingsindeed they have a very important physical role. But the question we can ask ourselves right now is: why do they also affect mood? Pregnancy hormones are also responsible for the so-called "neurovegetative phenomena " such as nausea, profuse salivation and abdominal pain.

These phenomena often have a psychosomatic basis, that is, they reflect the fears and uncertainties that every woman experiences at the beginning of a pregnancy. Fears and emotions trigger the production of these hormones and the consequent physical symptoms. Every woman who is expecting a baby who is the first or the second or the third also carries within herself a lot of fear and uncertainty, fear of how the pregnancy will go, of how the passage to mother or mother of an extra child will be, if it will be. capable of managing more children or not. Alongside the fears and uncertainties, however, at the beginning of pregnancy there is also the joy of having a baby, the happiness of having realized the dream of becoming a mother, the curiosity to know and discover this baby. In short, an alternation of thoughts and feelings that also cause an alternation of mood.

Of course, the fact that there are physical upheavals in the first trimester of pregnancy does not help, but this must be combined with all the thoughts and our past experiences related to motherhood. We cannot say that it is the hormones' fault if we have a strange dancing mood, we say that sometimes it is what is more convenient to say to those who do not know us and to those who do not want to invade our privacy by investigating the deepest thoughts and fears that this moment is. of passage involves.

Osteopathy for newborns, what are the positive effects ❯

add a comment of Hormones: their role in pregnancy