How long can brown discharge in pregnancy last? 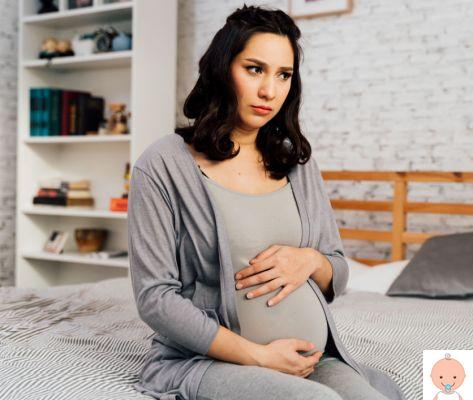 How long can brown discharge in pregnancy last?

During pregnancy, vaginal discharge can be cyclically more abundant, it is usually transparent and it is a leucorrhea which is one of the typical symptoms of early pregnancy. But what to do if any brown leaks? How long do they last and when to worry?

Implant losses, what color are they?

How are the losses in the first weeks of pregnancy? In early pregnancy you may notice small pink or red discharges which are commonly called implantation losses. They generally coincide with the time when the embryo implants itself in the inner wall of the uterus, called endometrium, and occur about ten days after conception, therefore a little earlier than menstruation.

Losses from nesting can be white with red traces or are bright red, light red or pink. Conversely, the losses that anticipate the onset of menstruation are more brownish.

Also read: Understanding Implant Leaks: How To Distinguish Them From Premenstrual Spotting

Brown losses in the first quarter

What causes brown discharge in pregnancy? If it may be normal to have small losses in the first days of pregnancy, essentially related tonesting of the embryo in the uterine walls, any other loss of color from red to brown in the first months of gestation should be reported to the doctor immediately.

One of the symptoms of a miscarriage, which affects 10 to 20 percent of pregnancies by the XNUMXth week of gestation, is a loss of dark red or brown color. Therefore, never underestimate sudden bleeding, especially if accompanied by cramps

Towards the end of pregnancy and the third trimester, leaks should always be reported to the gynecologist: brown leaks could indicate fetal distress, a problem in the positioning of the fetus or even growth difficulties.

When to worry about pregnancy leaks?

Le brown leaks, as we have seen, they are enough frequent in early pregnancy: they are related to the implantation of the embryo in the uterus and to the rupture of some small blood vessels. The blood does not come out immediately, but undergoes an oxidation process that makes its color darker, tending, in fact, to brown.

These leaks are generally not worrying, they are not abundant (they look rather like spotting) and they last a few days. However, in some women, brown spot discharge can also occur throughout pregnancy. The important thing is to report this to the doctor and make sure that everything is proceeding as it should, that the child is growing well and there are no problems or complications.

What are the dangerous losses in pregnancy?

In rare cases, red-brown discharge is caused by an ectopic pregnancy. This is a pregnancy that started outside the uterus, usually in the fallopian tube.

The color brunastro of these losses is explained because the bleeding is old blood, not bright red blood (therefore new). An ectopic pregnancy is a dangerous and potentially fatal emergency, you must go to the emergency room if, alongside the losses, symptoms such as:

add a comment of How long can brown discharge in pregnancy last?