How many names can be given to the baby? The complete guide 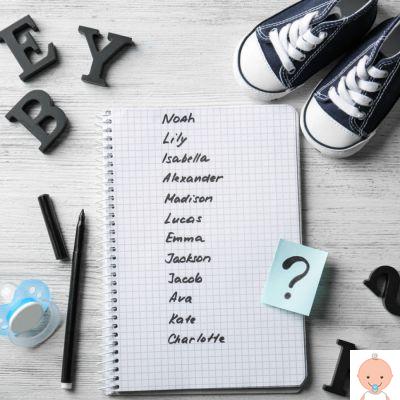 How many names can be given to a child

In the country how many names can be given to a child? Let's see together how many names we can give according to the law and how to behave in case of double name, separated or not comma.

How can a child be registered in the Registry?

Names for children in the country: what the law says

These are the main indications to follow when you have to name the child:

How many names can be given to Baptism

If by law it is possible to give up to a maximum of three baby names, in the context of Baptism it is possible to add others, which however, it is good to know, will have no value from a legal or personal point of view. That said, it is therefore possible to please both grandparents and give the child their name at the time of Baptism without forcing the child to bear too many names, perhaps excessively heavy or bombastic.

Even if at Baptism it is possible to add other names next to the three that the law sets as the maximum limit, it is still preferable to limit yourself to choosing two or three names also in that place. In many cases, especially in traditional and strongly Catholic families, the second name given at Baptism is of purely Catholic origin, such as the city / o, Christian / o and similar names.

Can the father's name be given to the child?

La law for the right to the name of each child was changed a few years ago and in the new text also articles 34 and 35 were changed. forbidden give the infant the same name as a living father or a living brother or sister. In short, it is not possible in our country to call a child with the same name as the father by adding a Jr (which stands for Junior) as in Anglo-Saxon countries. Having said that, parents will still be able to register the child in the registry with this name, and the final decision will then be sent back to the Judge.

It is good to know, however, that the father's name can be associated with another name, thus forming a double name.

Middle name in the country

The law states that they can be given to a child up to one maximum of three names. From 1 January 2022 it is possible to give the baby three names separated by commas and that it is legally possible to sign and use only the first name. The law of 10 December 2022, n. 219 amended article 35 which quotes verbatim:

1) The name imposed on the child must correspond to the sex and can consist of a single name or several names, even separate ones, not exceeding three. 2) In the event that two or more names separated by commas are imposed, only the first of the names must be reported in the extracts and certificates issued by the registrar and registry officer

Names prohibited in the country

We have said that parents can independently and personally choose the name to give to the newborn, but this does not mean that you can give absurd, offensive or ridiculous names. What are the names prohibited in the country?

In these cases the registry officer can communicate to the parents of theexistence of the ban, sanctioned by paragraph 1 and paragraph 2 of the law for the attribution of the name to the newborn of the Civil Code, but cannot refuse to transcribe the declared name. In short, he must accept the name imposed by his parents and can inform the Attorney who will choose whether to ask for a rectification of the name by law.

The law states, in its most recent amendment, that:

In the event that two or more names separated by commas are imposed, only the first of the names must be indicated in the extracts and certificates issued by the registrar and registry officer.

This therefore applies to names separated by commas that do not represent a double name, but rather two distinct and of different importance: if there is a comma, by law only the first name is valid. Different speech for those who instead have two names without a comma: in this case they have a double name and will always have to sign with both.

Law for the abolition of the middle name

Over the years, the obligation of having to sign in full with all names, whether separated by commas or not, has been abolished or re-established on several occasions. Let's see the steps:

And what if one of the parents disagrees with the stated name? It may happen that it is perhaps the father who goes to the Registry Office to declare the child and that he chooses a name that the mother does not like. Unfortunately, once declared and registered in the registry office, the name can no longer be changed and it will take an application to the Prefecture to ask to change the decision taken.

How much and how does the belly grow in pregnancy ❯

add a comment of How many names can be given to the baby? The complete guide