How much and how does the belly grow in pregnancy 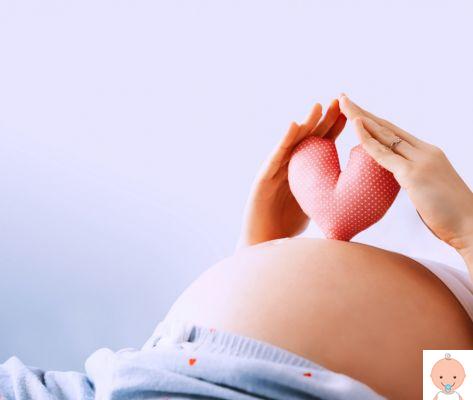 How the belly grows in pregnancy

It is absolutely the most typical sign of the presence of a pregnancy, it is what makes mothers more pleasure to observe: it is the belly growth in pregnancy. Let's try together to understand what it is and how it changes throughout the nine months.

What determines the growth of the baby bump?

To understand this it is important to imagine that your uterus is like a balloon to be filled with water. As the water becomes more and more the balloon becomes bigger and bigger, bigger and bigger until it reaches its maximum size. This was just an image to make you understand how it works, obviously within you there is not only water. In fact, the belly grows because the volume of the uterus grows, inside which your baby grows, the placenta that nourishes your baby grows and the amount of amniotic fluid that serves to protect your baby also grows and in part it is produced by himself.

As we have said, it grows slowly, a little at a time to allow the rest of the body (and primarily the spine and muscles) to adapt to the new situation while maintaining balance and functions exactly as before pregnancy. Let's try to see how the belly changes during each month of pregnancy.

Generally in this first month, the mother does not even know she is pregnant, she does not notice anything and visually the belly is absolutely identical to the month before. But she may have different sensations, a feeling of slight swelling, and own weight in the lower part of the belly, under the pubic bone. Few pay attention to it because often these sensations are also associated with intestinal or bladder disorders. It is therefore necessary to wait for the mother to know she is pregnant to start observing her belly and the changes.

Basically nothing changes in the second month compared to the first. The belly is not visible, has not grown and has not become bulky. The uterus is still far below the pubic bone and therefore it is impossible to see anything. But now mothers pay more attention to it, every day or almost every day they look in the mirror to understand if they see something, a little something, even just an inch more than the day before. But even in this month there are hardly any changes in the basin area and therefore we have to wait a little longer.

The third month is a rather special month in which the mother is more focused on nothing but growing the baby bump. The third month lived a little like the goal to be reached in order to be "out of danger" of abortion and therefore the attention falls on something else. But at the very end of the third month, between the 10th and 12th week of gestation the uterus grew enough to come out of the pelvic cavity (from the bony pelvis) and emerge above the pubic bone. It may be possible to notice as a small sketch, a swelling, right in that area, so to speak in the area of ​​the pubic hairline. In this moment, despite starting to see something, the rest of the world will hardly notice the belly, because it still hides perfectly under your clothes.

In this fourth month the visible growth of the belly begins slowly. Initially it will be just like we said before. That is, it will tend to develop not upwards, not towards the rib cage. It will move forward, as if the uterus wants to rest on the pelvis for support. This is one of the effects I was talking about before, that is the time that is given to the body to "re-settle" and make room for this uterus and this growing baby. At this point in your pregnancy you may notice the appearance of a darker vertical line that starts from the navel and goes all the way down to the pubis. It is the so-called linea alba, and it is an absolutely physiological event in pregnancy caused by hormones and hyperpigmentation (ie excessive color) of the skin of pregnant women. It will keep you company until the end of the pregnancy, growing together with the baby bump.

From the fifth month it will no longer be possible to "hide" the baby bump. It will grow proportionately but above all upwards, preventing the various shirts and sweaters from adapting to the abdomen as before pregnancy. The uterus that previously had acquired volume towards the front, now acquires it upwards by making force on the ligaments that in the meantime have stretched and on the displacement of the internal organs that have readjusted to make room for the baby.

The sixth month it almost seems that the growth slows down a bit, let's say that the internal volume of the uterus increases but visually from the outside it is difficult to ditinguere between the fifth and sixth month. In some cases, a further upward growth of the belly is noted, which begins to cause a sensation of suffocation or respiratory fatigue in the mother. In other cases, however, what develops a little is the "protrusion towards the outside" which involves the change of posture typical of pregnancy and the recognizable walk with an enlarged base.

At seven months, a kind of "explosion" seems to occur in most mothers. Suddenly the belly becomes much bigger, much more noticeable. The feeling of shortness of breath becomes maximum and the belly pours all outwards, definitively modifying the posture and walking of the mother. It is at this point that by observing the belly of the mothers one begins to make predictions about the sex of the baby. Yes, because our grandmothers said they could tell from the shape of the belly whether the baby was a boy or a girl. We will return to this topic later.

The eighth month is a bit of a transition period, the belly volume doesn't grow as much. The child has reached its development in size and therefore does not need additional space. Furthermore, further growth would be impossible since the mother's internal organs are now displaced in relation to the uterus and their functionality could be compromised by further displacement.

At 36 weeks, or the entry into the ninth month, the belly no longer grows and the baby begins to try to be born. The first contractions appear that make the belly become marble, and often the mother feels pushing as if the baby wanted to stretch his legs. This causes a kind of momentary deformation of the belly that is rather funny for the shapes it can take. At some point, around 37-38 weeks, the mother begins to breathe again, her belly has dropped. We say "the belly has dropped" because a sort of downward movement of the baby takes place, with the little head that descends into the bone basin, ready to be channeled to be born. This happens mainly in babies who are positioned "at the head" while for babies who will be born with a caesarean this is not allowed to happen. In fact, the caesarean is usually done around the 37-38 week, to prevent the child from inculcating and therefore the intervention is more difficult.

Here we are at the moment to talk about this popular tradition. According to tradition, women who are expecting a male child would have a more pointed belly, more protruding towards the outside than a mother who is expecting a child whose belly would be more rounded. This tradition has no scientific basis because, as we will see, the shape of a woman's belly depends on an infinity of things. Let's say that the grandmothers had a 50% chance of guessing the sex of the child, a rather high probability and for this the tradition still holds the court. You can guess the correct sex of the baby in one out of two cases.

How the baby bump grows in nine months

Nine photos for nine months, to follow how the baby bump grows

Why can women have such different bellies at the same time?

Everything that has been said so far is rather generic, the changes in the shape and volume of the belly are very subjective and the timing can also be different. This is because a lot depends on the physical structure of the mother, if tall or petite, the size of the baby and the amount of amniotic fluid present. If the mother is tall, the belly will tend to be more "distributed" and less prominent towards the outside, on the contrary, a tiny mother will have a prominent baby bump and will be "full belly". If the baby is big, or even if there are more than one, clearly the belly will be bigger and will take on different shapes, as well as if there will be a lot of liquid or a little liquid. So enjoy your baby bump, play with it as much as you want and don't pay too much attention to whether or not it respects the canons of other mothers.

How long can brown discharge in pregnancy last? ❯