How to breathe during labor: breathing techniques and tips for relaxing 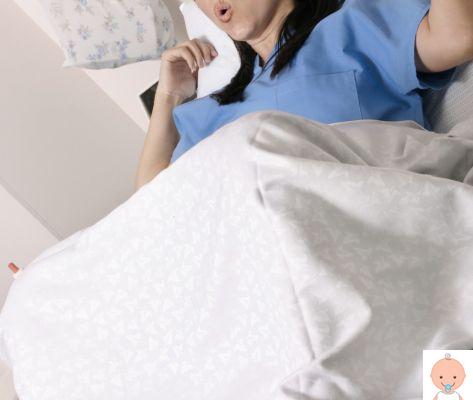 Relax and do a deep breath! This is the phrase that the woman in labor hears repeated most often by everyone around her. One of the most important functions of the pre-birth courses is precisely to teach expectant mothers who struggle to imagine labor and the pain produced by contractions which are the best. breathing techniques in order to make the pain more bearable. So here are the techniques for breathing during laboror and some tips to relax.

During the preparto courses they will explain to us how it is best to breathe during contractions and labor. There diaphragmatic breathing it involves, in fact, the diaphragm is a layer of tissue that separates the chest from the abdomen. Breathing with the diaphragm means starting the breath from this area of ​​the chest, being able, therefore, to take deep and oxygen-rich breaths and enjoy a beneficial effect not only from a physical point of view, but also from a psychological point of view. Why is it useful to learn to breathe this way? Because the opening of the diaphragm is connected with the pelvic muscles and therefore the exit of the baby's head will be favored because the muscles will support the movement.

Breathing is of great value in order to relax and better manage pain. Inhalation provides a large supply of oxygen to the tissues and helps to relax and maintain concentration. Furthermore, exhaling slowly and controlling this phase means encouraging the production of endorphins, hormones that help control pain and decrease pain perception, and the concentrationas well as the ability to mind control over pain. The exercises of display, for example, they can be useful to take your mind off and focus on yourself and not on the pain, but it can also be useful to learn some muscle relaxation technique piloted, such as that which involves focusing on individual muscles to be able to distinguish which ones are contracted and focus on them in order to relax them.

How to push during childbirth

How she pushes herself during childbirth? At first, mothers-to-be believe that for the entire duration of labor they have to push following the contractions, in reality this is not the case at all. To start pushing, you have to wait until the cervix is ​​dilated at least nine centimeters. Starting earlier may result in an increased risk of lacerations, because naturally indulging the child's instinct to go out when the cervix is ​​not fully dilated could be risky. When the midwife says it's time to to push Breathing will play a decisive role in the expulsion phase: it serves to feel less pain and also to increase the effectiveness of the push and the exit of the child.

Breathing, to be effective, must be diaphragmatic, which means, as we said, that you have to push on the diaphragm and concentrate the thrust towards the lower abdomen: then inhale at the level of the diaphragm and then exhale in conjunction with the thrust. In this way we also help the perineum to relax.

But how do you know when it's time to push? The operators will certainly tell you but know that there is the so-called fetal ejection reflex which leads to understand and spontaneously feel the need to push.

During the childbirth preparation courses some breathing techniques will be illustrated which also include the collaboration of the partner. Breathing during pregnancy means ensuring the right oxygenation for the fetus and the mother's body and maintaining concentration and emotional presence. In this sense yoga can also be of help, a discipline that finds its central fulcrum in correct breathing, and which can be practiced by future mothers during the nine months of pregnancy.

How to do some breathing exercise in pregnancy?

To become aware of your body you can place your hands on the lower part of the belly trying to breathe as slowly as possible.

You have to inhale deeply, feel your nostrils dilate filtering the air and then exhale through the mouth feeling your abdomen swell in the inhalation and then lower in the exhalation just like a wave that first reaches the beach and then withdraws back into the sea.

This is undoubtedly the best exercise to tune into your body and in particular with your uterus during labor and allows for good relaxation from the very first moments.

Read also: The stages of labor

Breathing during the pushes of childbirth

At the beginning of labor the important thing is to breathe deeply, focusing on diaphragmatic breathing.

As labor proceeds, the contractions intensify and with them the pain, therefore, it spontaneously accelerates the rhythm of breathing.

Venturing into the strongest contractions, therefore, it is advisable to accompany each of them with the breath, when you perceive their arrival you engage in a sort of deep welcome breath and then slowly exhale.

As the contraction fades, it is important to exhale deeply as if you were clearing your body by blowing out the pain sensation you felt. This sort of sigh of relief is important because it helps to relax the body between contractions by resting the parturient after the effort just performed and signaling to the carer that this is the best time to communicate with her or to make her change position.

In the latest stages of labor when the contractions reach their peak, the expectant mother will probably feel the need to breathe with the upper part of the chest, making the breath faster but inevitably also more superficial due to the short times between one contraction and another.

On Youtube and on the net there are numerous resources that explain how we can relax during labor, how to push and how to breathe correctly.

Here is a very useful video to learn how to breathe thanks to the execution of some breathing exercises.

How to recognize the signs of labor ❯

add a comment of How to breathe during labor: breathing techniques and tips for relaxing