How to celebrate a daddy shower 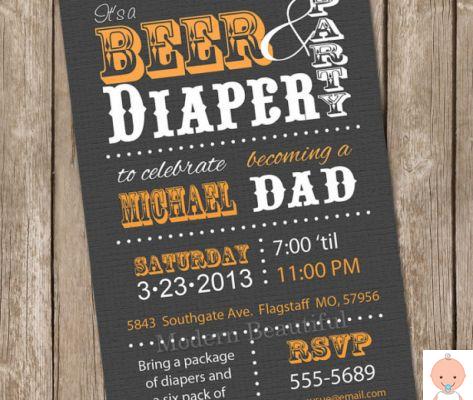 for mothers, and the one for

for future dads who want to celebrate the arrival of the baby.

The daddy shower, also known as the man shower, is increasingly present in America and it is to be expected that the trend will also arrive in France and the country. Future American dads intrigued by this mothers day for


celebrate the baby's arrival, for several years they have decided to create a party of their own.

Baby Shower: how to organize a birth party in the country

As we read on the Today site,

Cristobal Sanchez said he organized a daddy shower many years ago. The future dad was a colleague of him and Daisie confessed that she found this idea original and a bit strange. In America there are more and more agencies and companies specializing in

founded in 2002 by two friends Craig Dexheimer and Aaron Moniza. The idea came on the occasion of the birth of Craig's son.

INVITATIONS FOR A DADDY SHOWER

Aaron's wife decides to organize a baby shower for Craig's partner and looks for a solution to keep Craig and his friends busy. Aaron says that for the occasion gifts were brought to the future dad, they played games and then spent the evening in a bar. And since then, as the idea was popular, they have celebrated all the births of their friends' children. Craig and Aaron sensed the success of the initiative and thus created a company specializing in daddy showers, but with a simpler and more discreet footprint for men.


HOW A DADDY SHOWER IS ORGANIZED AND CELEBRATED -

But what are the ingredients for a perfect daddy shower? Anything

, cupcakes or exaggerated party as for the

, everything is dedicated to play and simplicity for future dads. A daddy shower must not be without beers, and diapers, useful for the arrival of the baby and for the family's finances. Then invitees are required to bring supplies of diapers (which can be presented as one

) in exchange for a good sandwich and a beer.

The Baby Shower organized by Rosa, a "little planet"

entertainment activities for the evening

, Craig and Aaron propose rides with blindfolded strollers, or drinking beer from bottles. And even the invitations for the daddy showers are beer and diaper themed: "beer and diaper party". For gifts to the future father, t-shirts are offered with nice writings referring to paternity, gadgets and other accessories useful for the birth of the child. In some cases there are also

and the winner is rewarded with tickets for sporting events etc. The

or in other favorite meeting places of the future dad. At every daddy shower there is no shortage of laughter and the future dad can be the protagonist of many jokes such as: wearing a disposable diaper during the party, or keeping a pacifier in his mouth or wearing a bib

But how do you explain this new trend in America? Maureen Anders

points out on Today that dads are increasingly involved in the education and rearing of their children. Just think

also to changes in the family unit, where more and more women work and husbands stay at home with their children.

Pictures of diaper cakes, a great gift idea for a new mother and her baby

How do you see if it is male or female ❯

add a comment of How to celebrate a daddy shower