How to educate twin children: useful tips for parents 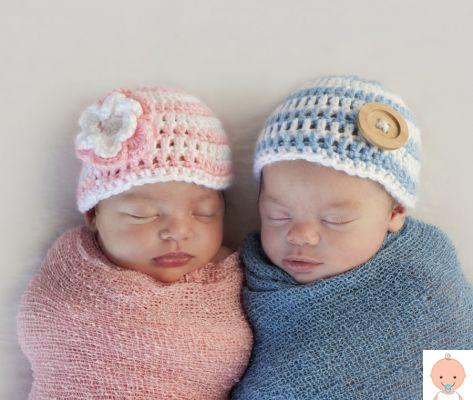 How to raise twin children

What does it mean to be gemelli, in developmental age, in adolescence, but also in adulthood? What does it mean to become parents of twins and how to relate to them? At school: together or apart? And when are there more than two? To be mom of twins it is a really complex and demanding challenge and one of the most frequently asked questions is: "I have gods twin children, how to best educate these brothers united by such a unique, special and in some ways unfathomable bond "?

Be parents of twins it is an intense and important experience, but also a very demanding one. The dynamics within the twin couple require specific attention. According to experts, the first thing to know is that you should avoid as much as possible to call twins "twins" when addressing them, in order to facilitate the identification of each individual child. Being twins is a unique and in many respects positive experience, but it is also subject to some evolutionary risks, which, through preventive interventions, can be faced and managed. Knowing them allows you to avoid that the possibility of living as a couple turns into the impossibility of living apart.

But how does the personality of the twins? Usually heterozygous twins, also called sibling twins, show a significant affinity, as if traveling on the same wavelength. At first it is easy for females to be the driving force, the leader, but over time this could change.


At first, in the first few years of life, twins are likely to develop their own language and their own form of communication that excludes others, just as it can be common to see that they play more alone than with others, who tend, in short, to isolate themselves a little.

This is why it is important, at a certain point, to implement strategies to help them build their own independence and autonomy.

Being a mother of twins

What does it mean to be the parent of twins? The problems and difficulties are not lacking and can be listed as:

Nonetheless the secret to being the mother of twins, as in reality for all mothers with several children, it is the organization.

Read also: What to buy for twins

Mothers of twins instructions for use

How to handle twins

As said, the• innovative business organization based on the use of technologies and digitalization of internal and external processes, as well as the active and continued promotion of the services we offer through business development, marketing and communication systems (letter "I" of our logo actually stands for "Innovation"); it is the basis of a peaceful and less stressful life. In general, two general recommendations apply:

How can this be done? It takes even 20 minutes to dedicate to each of the two individually, perhaps in the evening when the father is also there, or with the help of the grandmother or the nanny.

How to raise twins

It is easy for a whole universe of adult reference figures to rotate in the life of the twins who help the parents in the task of having to raise these children. For the little ones the presence of uncles, nannies, grandparents is undoubtedly a wealth, the important thing is that contradictory messages do not arrive from an educational point of view and that mum and dad are always the reference people for these issues.

That said, the advice for parents of twins is above all to delegate with great tranquility and to leave the feelings of guilt at home: entrusting a child to the grandmother while accompanying the other to the school play does not create any psychological discomfort and should not be seen as a failure, but as an opportunity to spend a while 'of time with one of them individually.

The education of twins

Just like when you have two or more children, theeducation of parents should be consistent, while respecting the inclinations and character predispositions of individual children.

One of the questions that parents of twins grapple with most is: put them at the same school and in the same class? Most schools recommend dividing the twins and enrolling them in different classes, this is because in many cases one of the twins "suffers" a little the personality of his brother and in the classroom would risk not being able to emerge. To break, therefore, this bond so close at least in the time spent at school and allow both of them to bring out their own personalities, we choose to place them in different classes.
For ease of family organization, it is however advisable to choose the same school so that the entry and exit times, holidays and closing days coincide.

However, the commitment of wanting to do different things for the twins should not become an obligation: if they both like a sport it does not mean that they cannot register together. The important thing is to evaluate case by case by observing the growth and psychological development of individuals.

Piera Brustia, psychologist, psychotherapist and professor of dynamic psychology at the psychology faculty of the University of the city, has been working for years on the topic of family and twins and has written a manual to solve the problems of everyday life with a twin couple.

In the book Living with twins. Small survival guide (Espress Edizioni), the expert offers the answers to address the peculiarities of twin relationship in family membersa, at school and in different social contexts: from the diagnosis of twin pregnancy to adulthood, from the alarm bells relating to the couple effect up to school placement.

It is a guide simple, discursive and full of explanatory examples, which comes from the experience in the field, which will allow you to face the complexities concerning the growth and education of twins or multigemini, and avoid that, due to preconceptions and educational errors, positivity of living as a couple transforms over the years into the impossibility of living apart.

The book is aimed at anyone who wants to know more about issues relating to twinning; for families, child care workers (managers, educators, nurses, child care workers), school workers (managers, teachers, pedagogists, psychologists), health workers (doctors, midwives, nurses, psychologists, social workers) and for all those who, for various reasons, find themselves confronted with twin issues.

Audio Video How to educate twin children: useful tips for parents
How to get rid of stretch marks: remedies and treatments ❯

add a comment of How to educate twin children: useful tips for parents