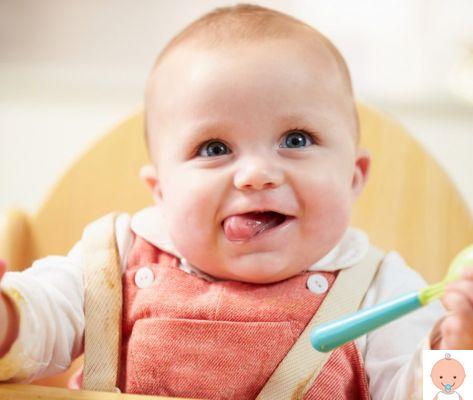 La fruit it is very important in feeding a baby, starting from weaning. At the beginning we can propose it in the form of homogenized, for its velvety and lump-free consistency.

At a later stage, you can move on to some homemade preparations with grated, blended, squeezed or cooked homemade fruit. The fruit to be offered to the child varies according to age and phase weaning and depending on the preferences of the child. Mele e pere for example they can be consumed from 4 months. The bananas, a fruit with precious nutritional qualities, can be introduced instead as early as the sixth, seventh month. They should be offered in the form of puree, in order to facilitate the child in swallowing. There banana children will like it for its sweet taste and will be an ideal food for growth thanks to its supply of minerals and vitamins. In any case, we always recommend that you first ask your pediatrician for the opinion on how and when to introduce the banana in weaning.

Le oranges and clementines instead they can be administered in the form of juice from 5 months. Apricots, medlars and peaches from 6 months onwards, while kiwi and strawberries they could trigger allergies, so they should be avoided in the first year. Melon, watermelon and grapes they are difficult to digest, so it would be preferable to offer them after the first year of life. In fact, the diet of the weaning requires the gradual introduction of food, so that the metabolism can get used above all to the so-called allergenic elements that can trigger allergic outbreaks by the child's immune system.

In the most advanced phase in which we can move on to homemade preparations, here's how to cook them and make them appetizing. In this video la pedagogist Marta Stella Bruzzone he explains step by step
how to prepare a homemade baby food


How to clean the house in no time: tips and tricks ❯