How to recognize a pregnancy belly 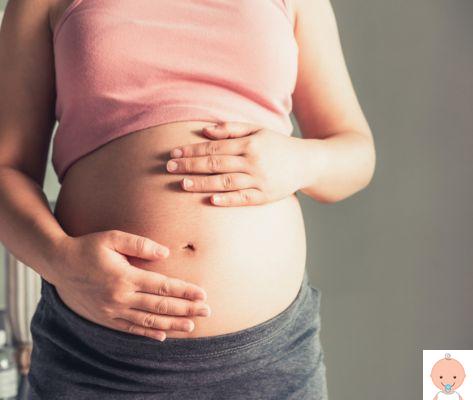 How to recognize a pregnancy belly

The belly is one of the parts of the body that obviously changes the most during pregnancy, and if at the beginning, in the first trimester, it is only slightly hinted at, already from the second trimester it is rounded to become as big as a watermelon the third trimester. . Each baby bump is unique in both shape and size, but there is a way to recognize a pregnancy belly? And when do you start to see?

How to distinguish a pregnant belly from plain fat abdominal?

Those who are fattened have a flaccid and soft belly, with the fat that tends to turn downwards. On the contrary, the pregnancy belly has tightly stretched skin, it is a hard belly that aims upwards or outwards.

Belly from pregnancy in the first month

The belly, as we have said, changes and grows month after month. It doesn't change much at first and it's difficult, if not impossible, to tell that a woman is pregnant. During first weeks of pregnancy, the baby is still very small: at the end of the first month it will be the size of a poppy seed and probably the belly will begin to hint slightly only at the end of the third month, when the fetus has reached the size of a lemon.

When do you see the pregnancy belly?

At the end of third month you will begin to notice a small swelling of the belly caused by the increase in the amount of amniotic fluid and in the size of the uterus.

The real pregnancy belly it will only be noticed in the second quarter: it will still be a small belly, almost elegant in its shape and size, and comfortable to wear.

But be careful: the size of the baby bump will suddenly begin to visibly increase and the belly will grow, on average, by 1 centimeter per week.

The belly of pregnancy is characterized by three important aspects:

Read also: What the baby feels in the belly

Swollen belly in pregnancy in the first few days

It is possible to notice one swollen belly right away, from the first days of pregnancy? The first symptoms of conception are so many and vary from woman to woman. Certainly in the absence of menstruation, a abdominal swelling it can lead to suspicion of pregnancy, but it can also be caused by PMS, constipation, gastrointestinal disturbances and nutrition.

According to experts, pregnancy-related swelling of the belly comes as a feeling of heaviness in the lower part of the belly, under the pubic bone.

The only way to know for sure if you are pregnant is to do a pregnancy test: nowadays the most sophisticated home tests allow you to discover a pregnancy even a few days after the missed menstruation.

One of the rather well-known popular legends concerning the methods for predicting the sex of the baby has as its protagonist the shape of the belly: it is said, in fact, that if it is a tip or low the unborn child would be a boy, while if it is higher or more distributed in the central part of the abdomen it would be a girl.

As we have said, every baby bump is different and is not only distinguished by shape and volume but also by position: what is the difference between a high and a low belly?

How to get pregnant if he doesn't want to, practical advice ❯

add a comment of How to recognize a pregnancy belly